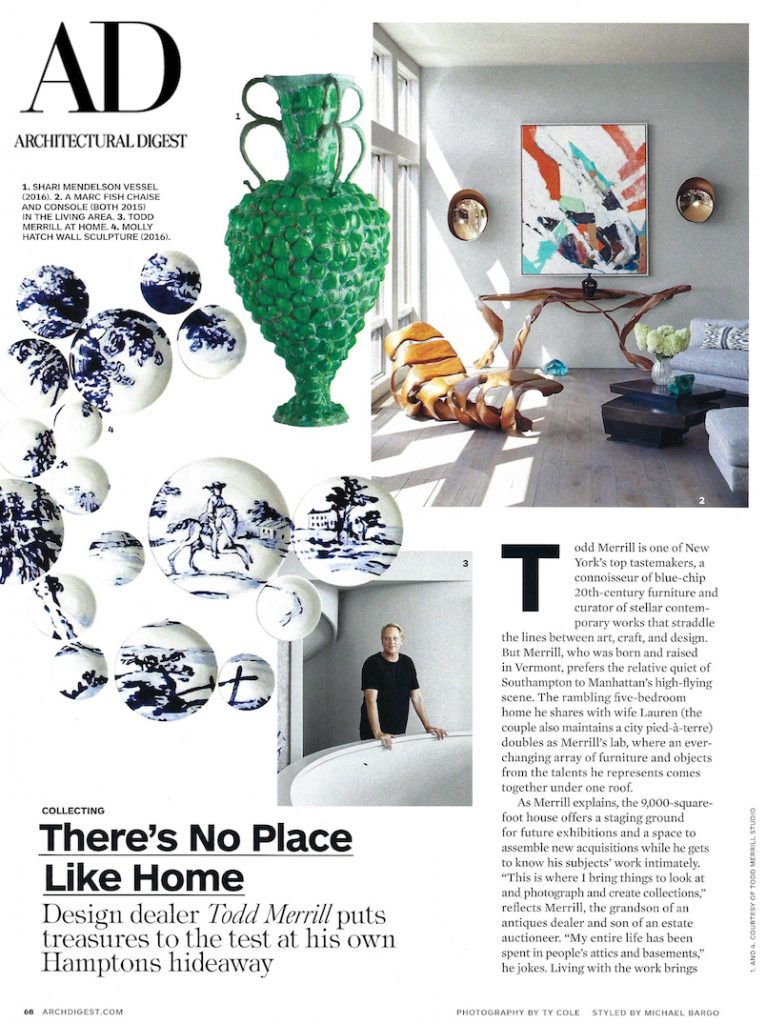 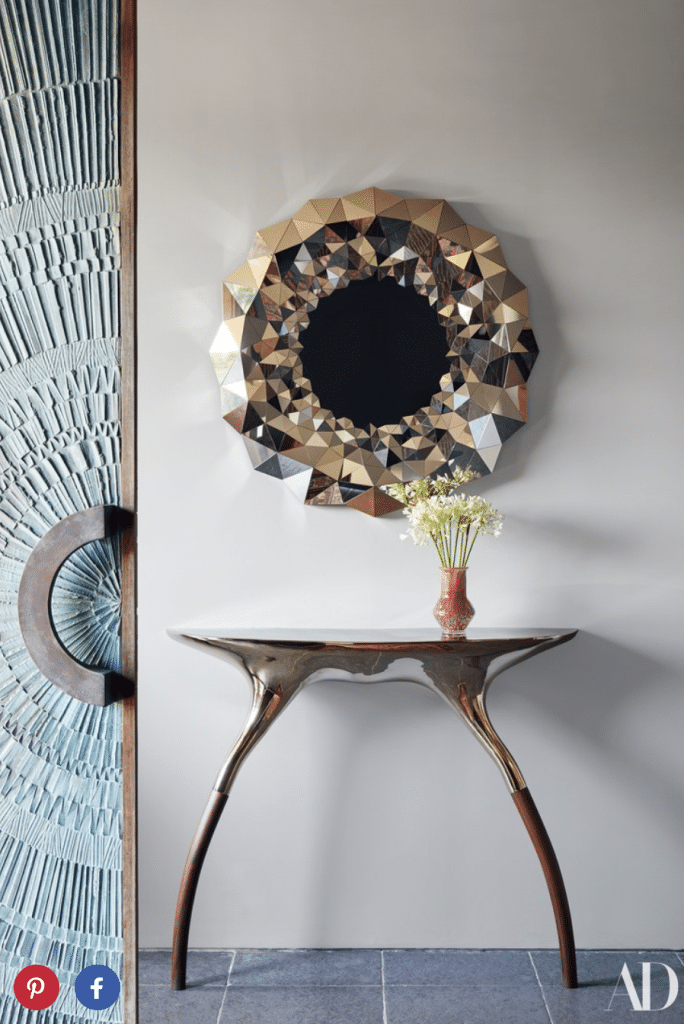 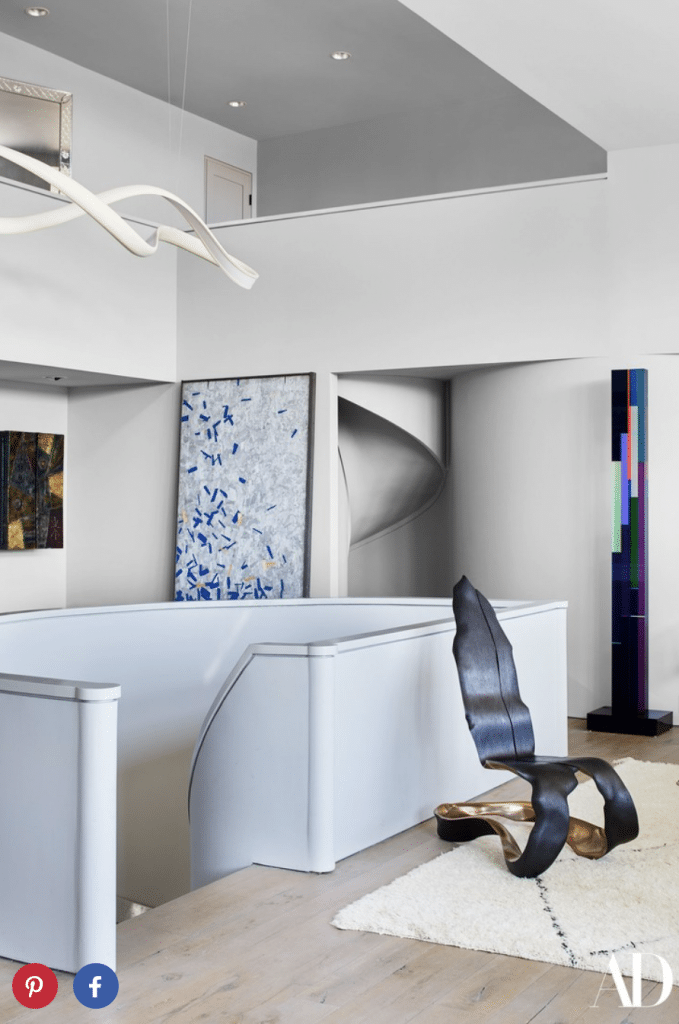 A Marc Fish chaise and console (both 2015) in the living area. 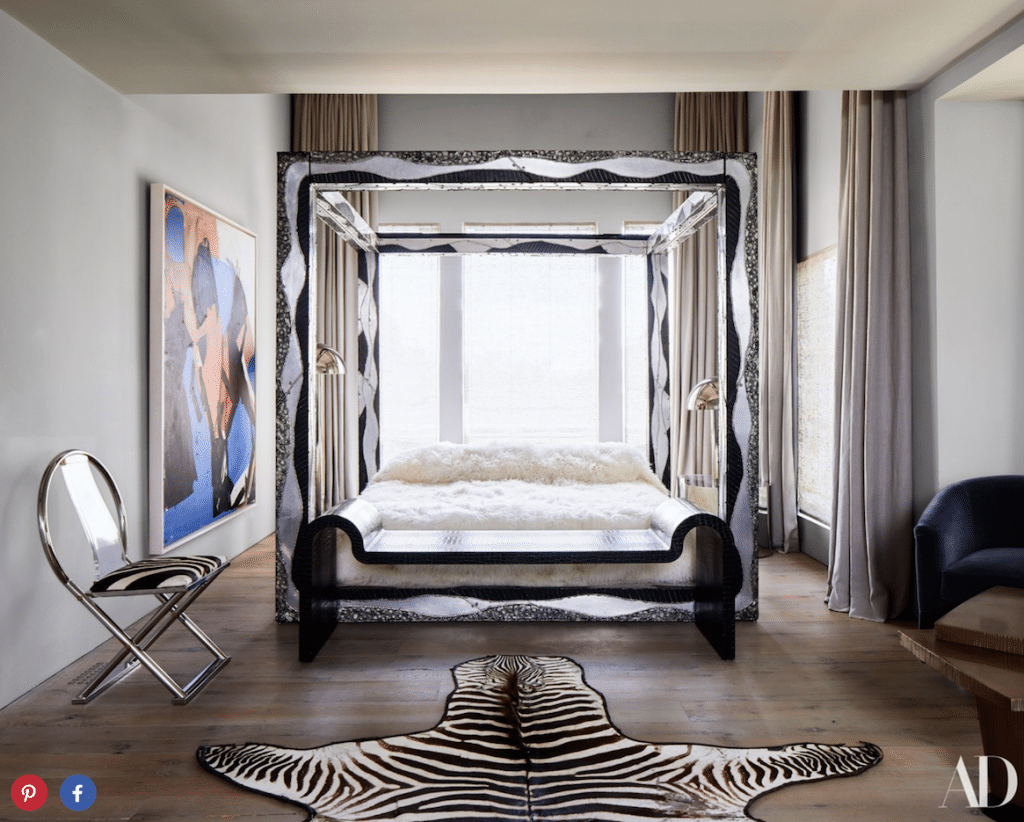 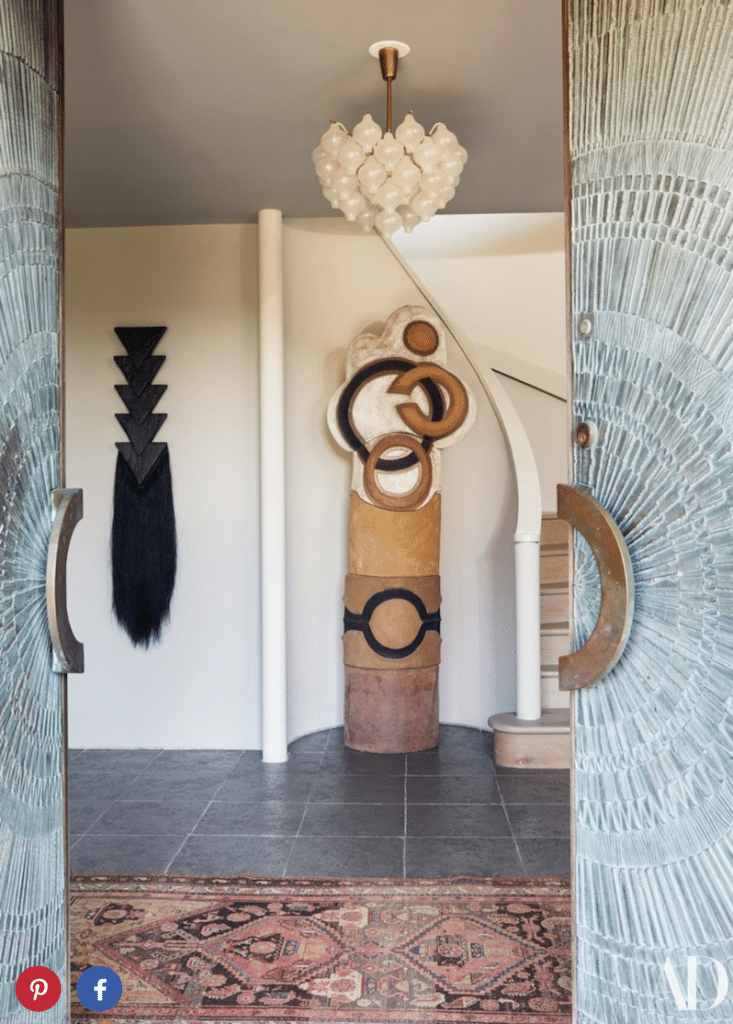 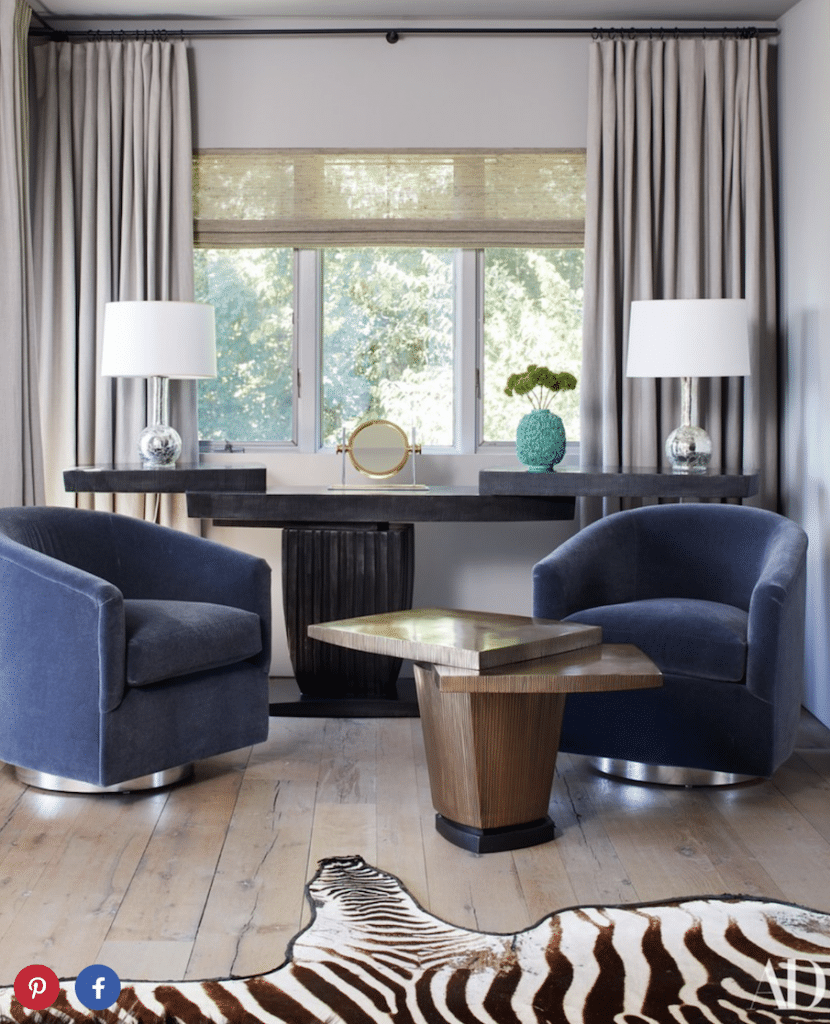 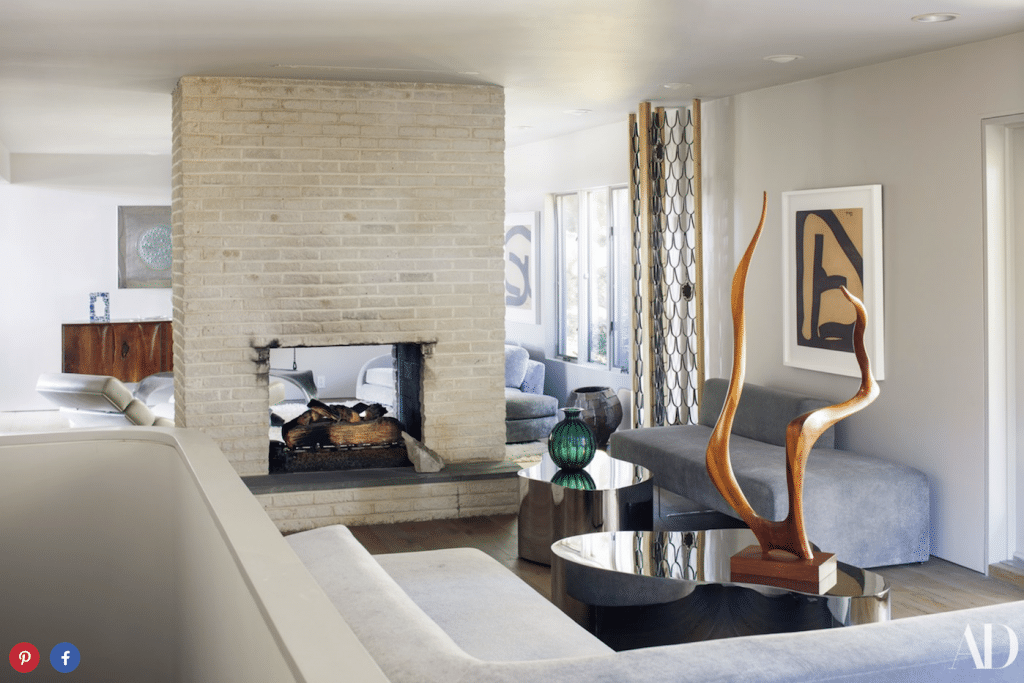 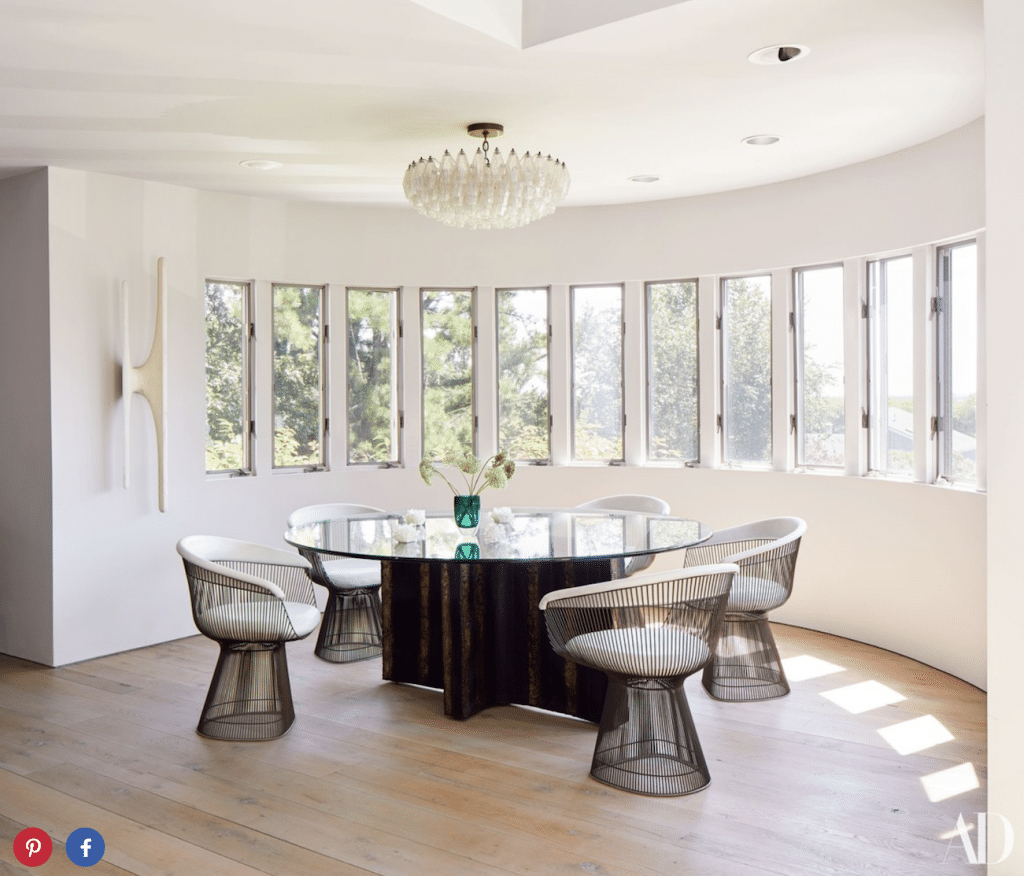 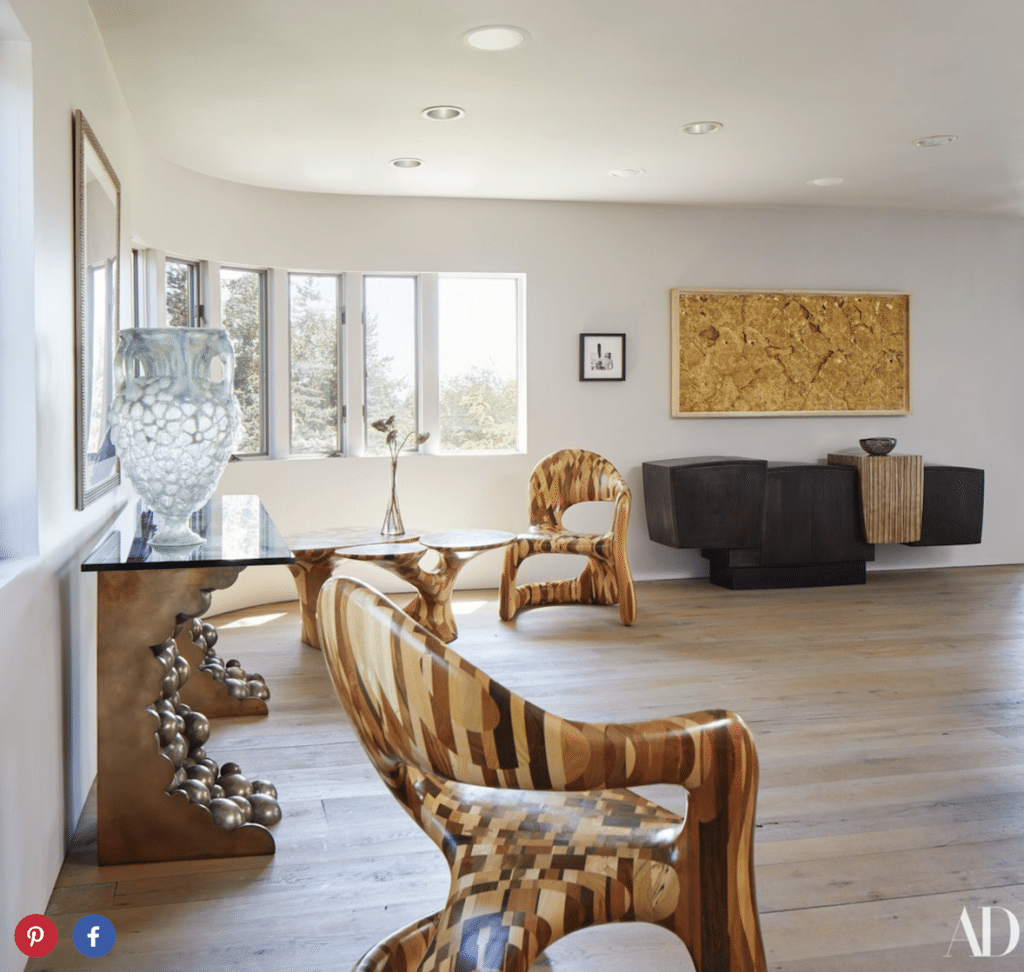 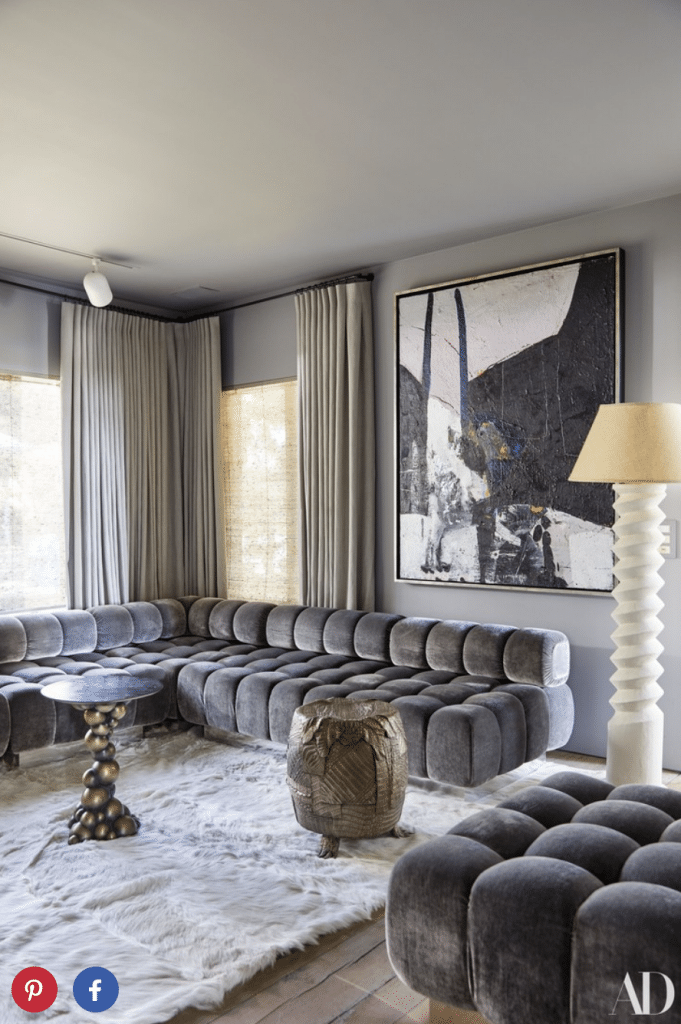 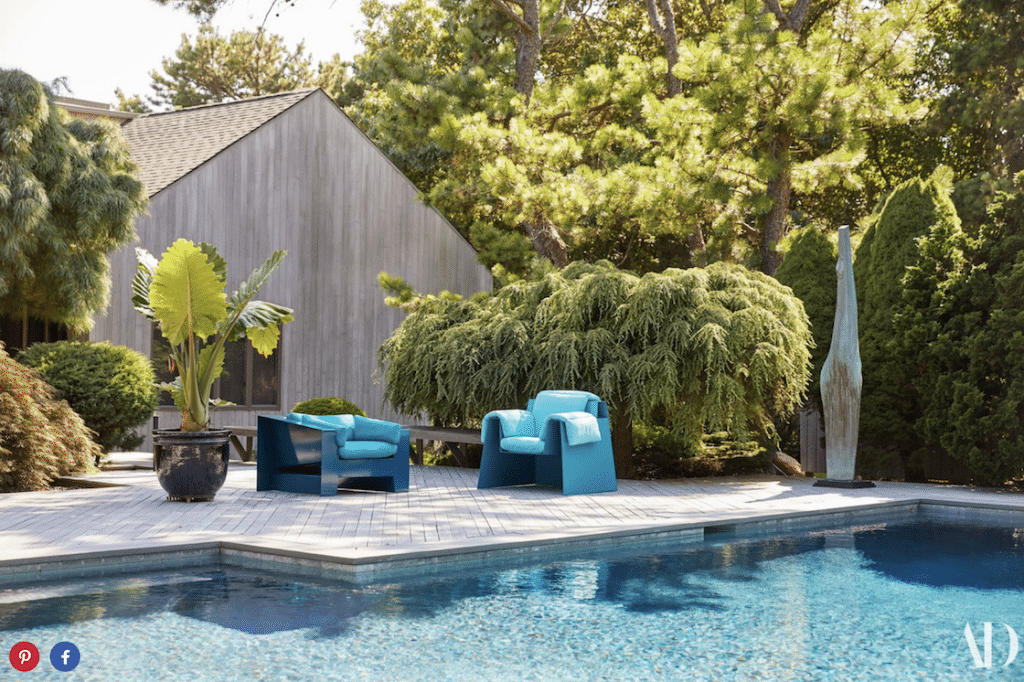 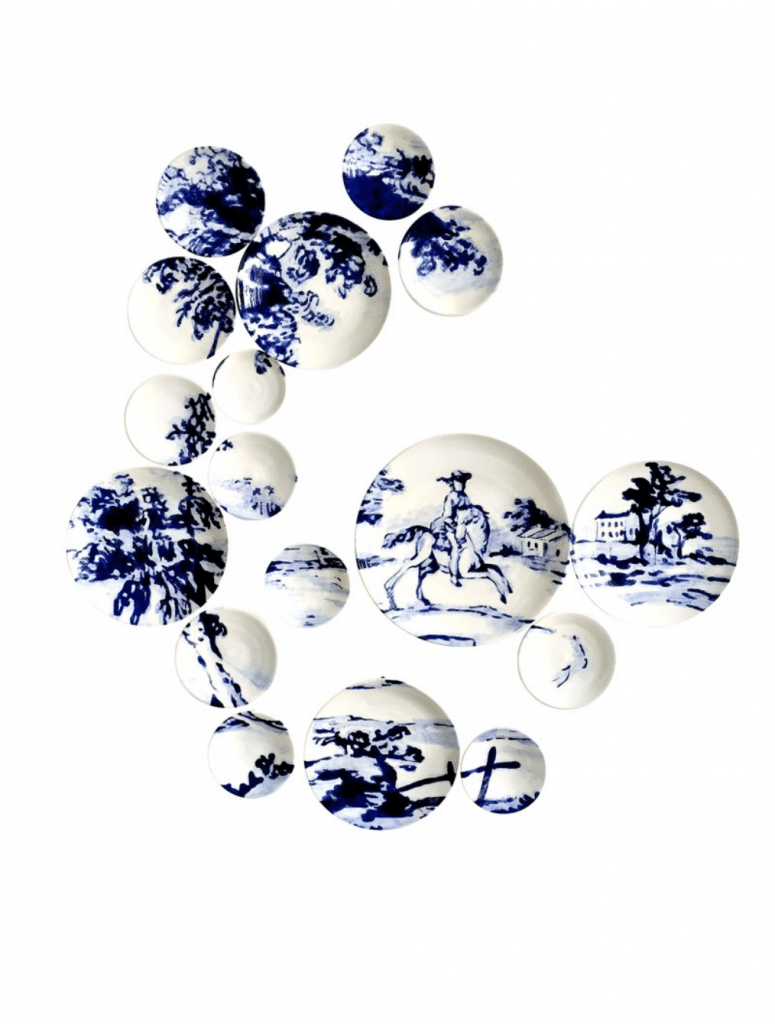 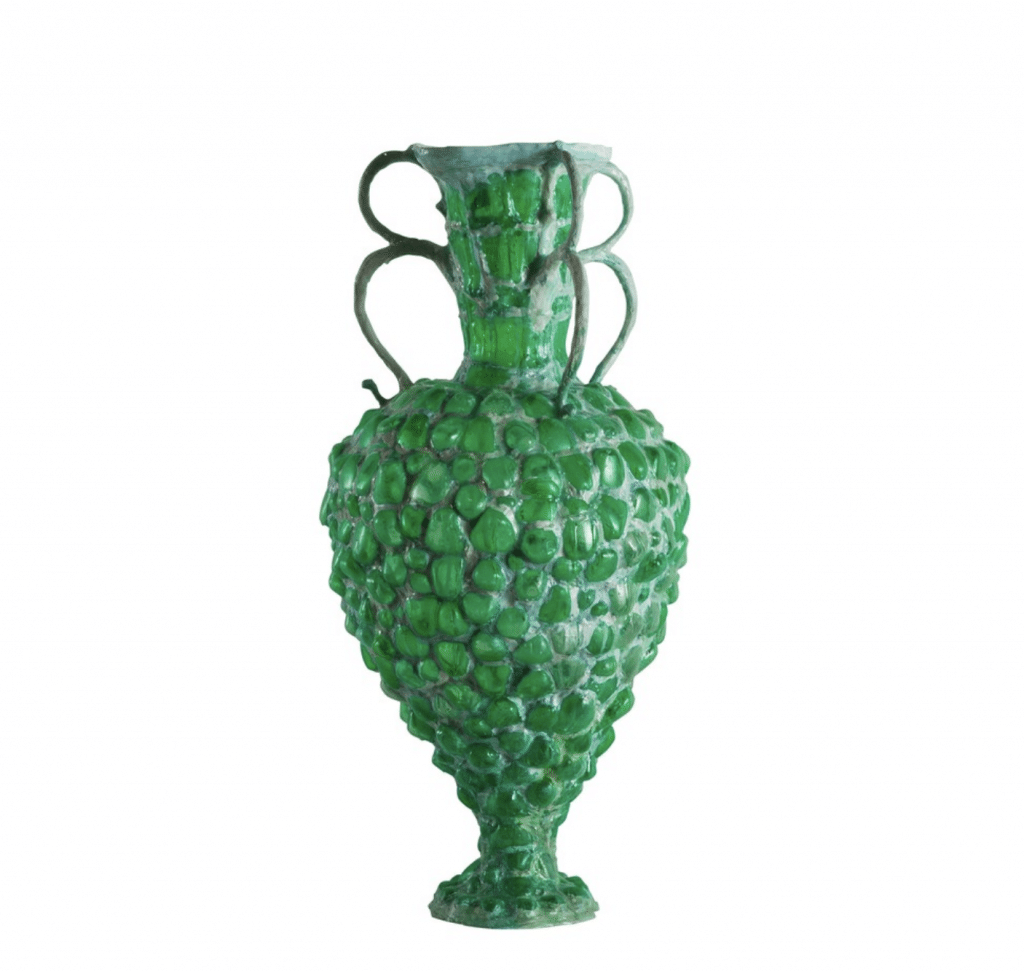 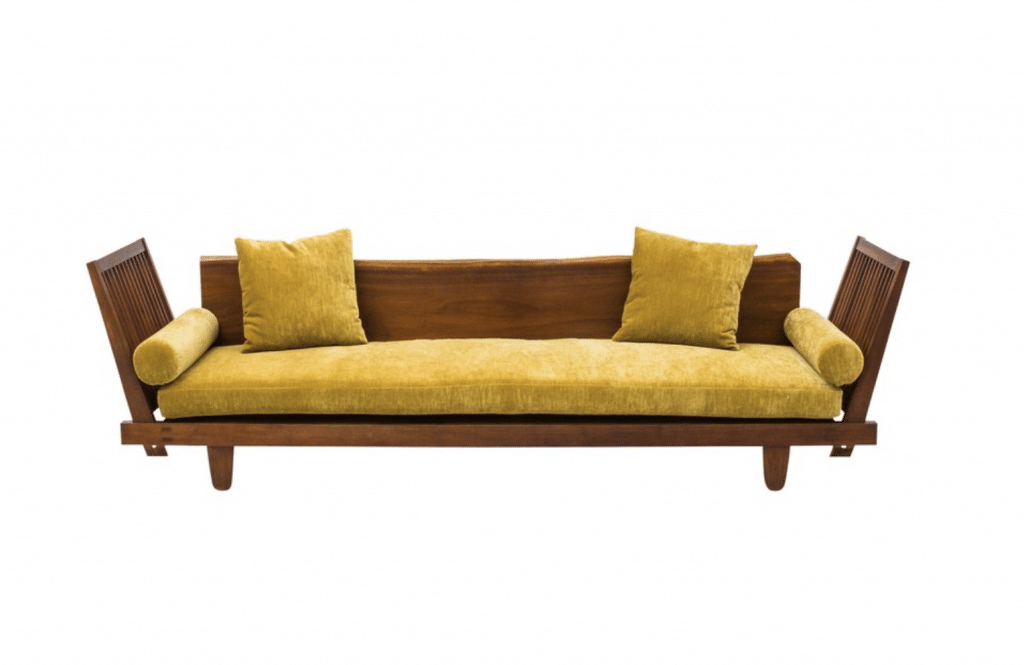 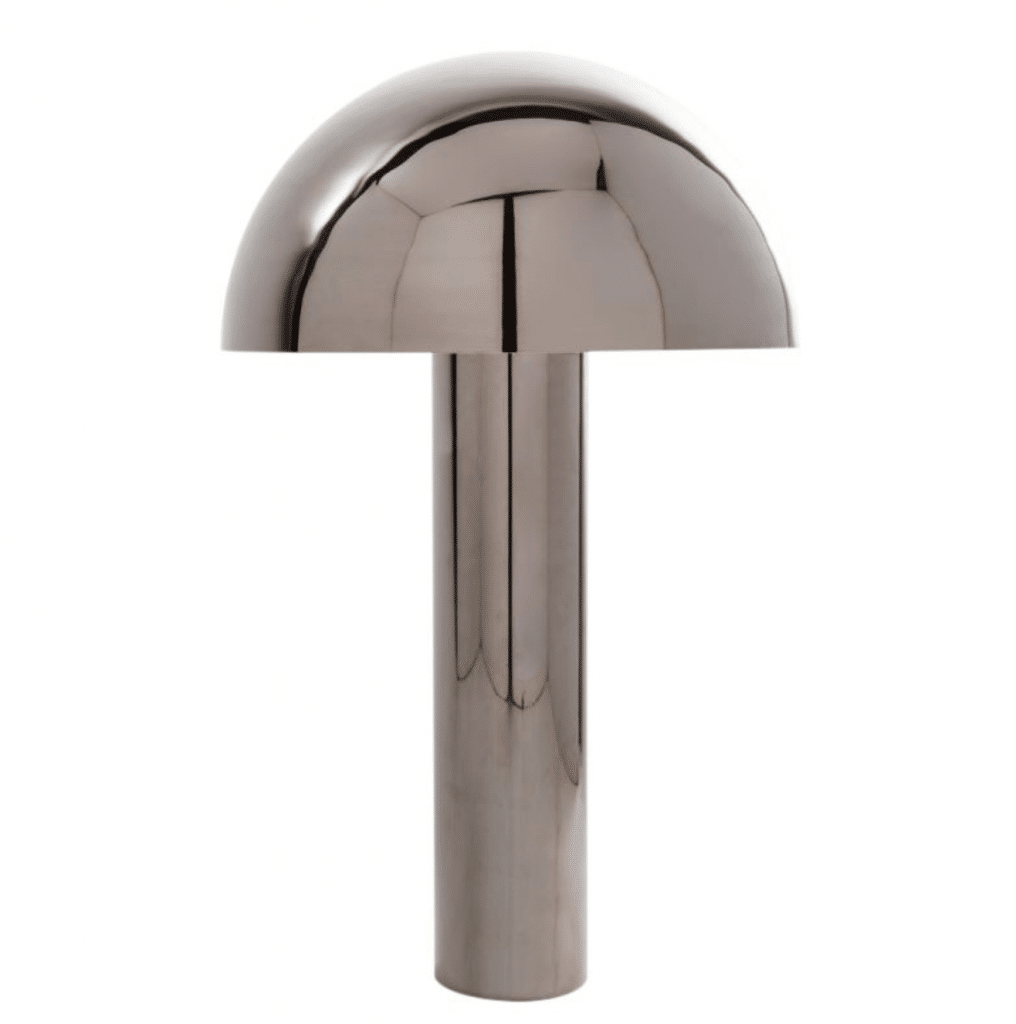 Designer dealer Todd Merrill puts treasures to the test at his own Hamptons hideaway.

Todd Merrill is one of New York’s top tastemakers, a connoisseur of blue-chip 20th-century furniture and curator of contemporary works that straddle the lines between art, craft, and design.  But Merrill, who was born and raised in Vermont, prefers the relative quiet of Southampton to Manhattan’s high-flying scene.  The rambling five-bedroom home he shares with his wife Lauren (the couple also maintains a city pied-a-tere) doubles as Merrill’s lab, where an ever-changing array of furniture and objects from the talents he represents comes together under one roof.

As Merrill explains, the 900-square-foot house offers a staging ground for future exhibitions and a space to assemble new acquisitions while he gets to know his subject’s work intimately.  “This is where I bring things to look and photograph and create collections,” reflects Merrill, the grandson of an antiques dealer and son of an estate auctioneer. “My entire life has been spent in people’s attics and basements,” he jokes.  Living with the work brings awareness of subtle details that might go unnoticed in the gallery — a glint of sunlight on the bronze leg of a shapely Alex Roskin console, for instance, or the visual tension between an abstract canvas and a table by woodworker Marc Fish. “Looking at things together, you really start to see and learn from them,” offers Merrill. “It helps to inform your collecting.”

Not that Merrill needs much help.  His gimlet eye and profound knowledge of the artists and designers he represents have earned him a stellar reputation. His lofty Tribeca gallery, Todd Merrill Studio, and its seasonal Hamptons outpost are favorites of A-list architects and decorators — Peter Marino, Robert A.M. Stern, Tony Ingrao — and a diverse group of collectors, including Lenny Kravtiz and the Duke of Devonshire.  Atlanta’s High Museum of Art and the de Young Museum in San Francisco have acquired work from two of Merrill’s artists: Molly Hatch and Beth Katleman.  Merrill’s book Modern Americana (Rizzoli), a go-to scholarly resource, will mark the 10th anniversary of its publication with an expanded edition this fall.

His three-level hillside home, blessed with views of Shinnecock Bay and the Atlantic Ocean, is a mid-1980s mashup of Fire Island beach house and Charles Gwathmey-inspired modernism. After buying it nine years ago, he and his wife removed the most glaring vestiges of the era – vertical blinds, off-white porcelain tiles – added French limestone and reclaimed oak floors, whose smokey-hued Scandinavian oil finish complements the warm gray paint on the walls.

Airy, light-filled interiors are now a neutral backdrop for an array of limited-edition and one-of-a-kind furniture and art, from the master bedroom’s massive Paul Evans four-poster of polished aluminum to the dining area’s armchairs, a patchwork of recycled wood by the London firm Yard Sale Project. Merrill makes a convincing case for mixing periods and styles. In the living room, he groups a 1970s Milo Baughman swivel chair and a sumptuous wood credenza by Phillip Lloyd Powell – a contemporary of Nakashima – with a spectacular squid ink-dyed oak, aluminum and resin side table by Fish.

Given the effort and expense of constantly packing and transporting large, valuable objects, the flow of gallery-bound works and inventory through Merrill’s home is more than a play for free storage. But he recognizes the benefit of extra space. “I could have rented a warehouse,” he notes wryly. “Instead, I bought a warehouse with a swimming pool.”