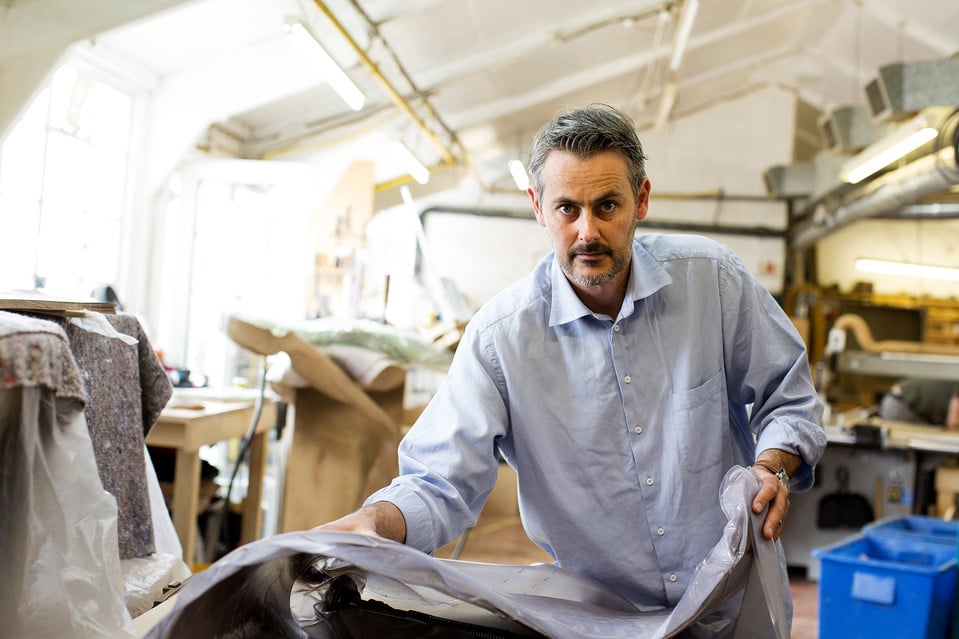 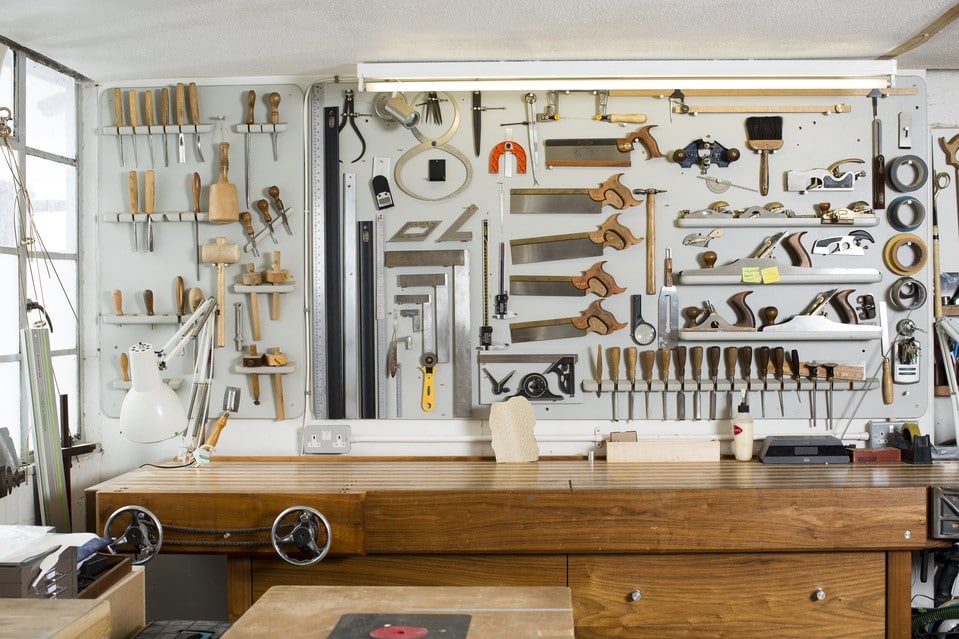 A selection of woodworking tools in Marc Fish’s studio. 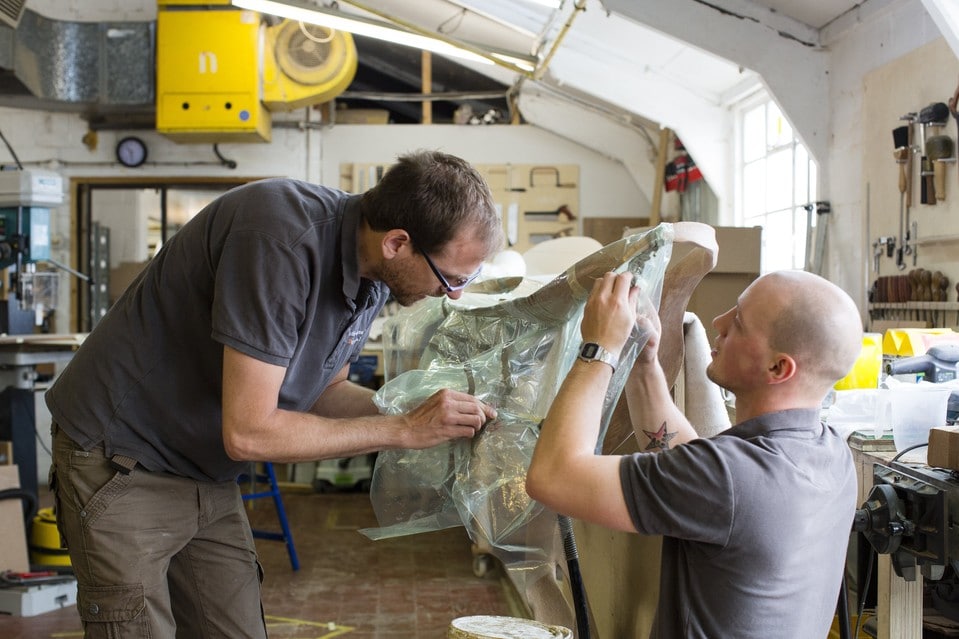 Staff members put the finishing touches on a new piece. 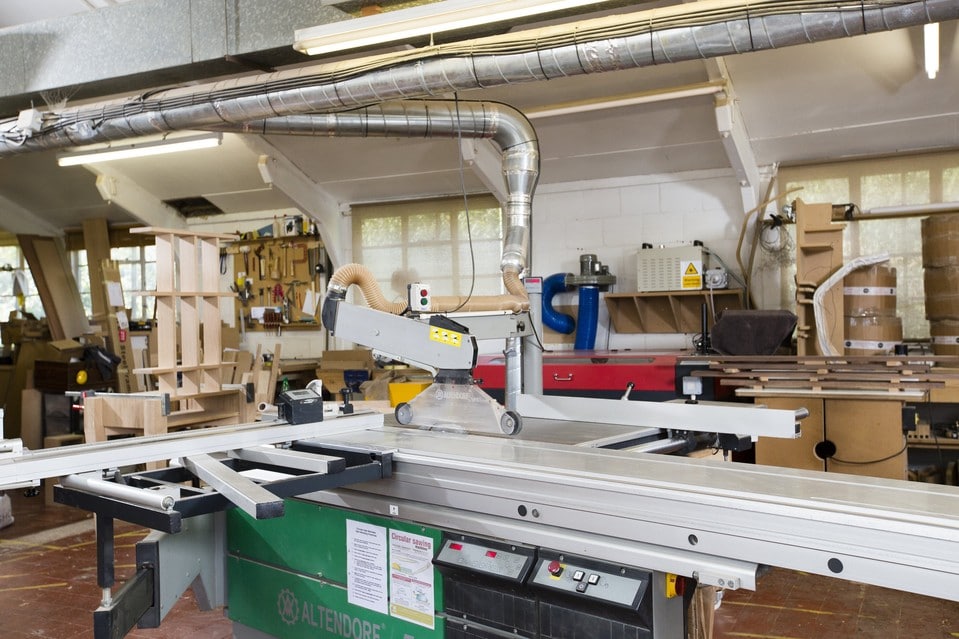 The furniture maker’s sudio is a 2,600-squar-foot postwar depot. 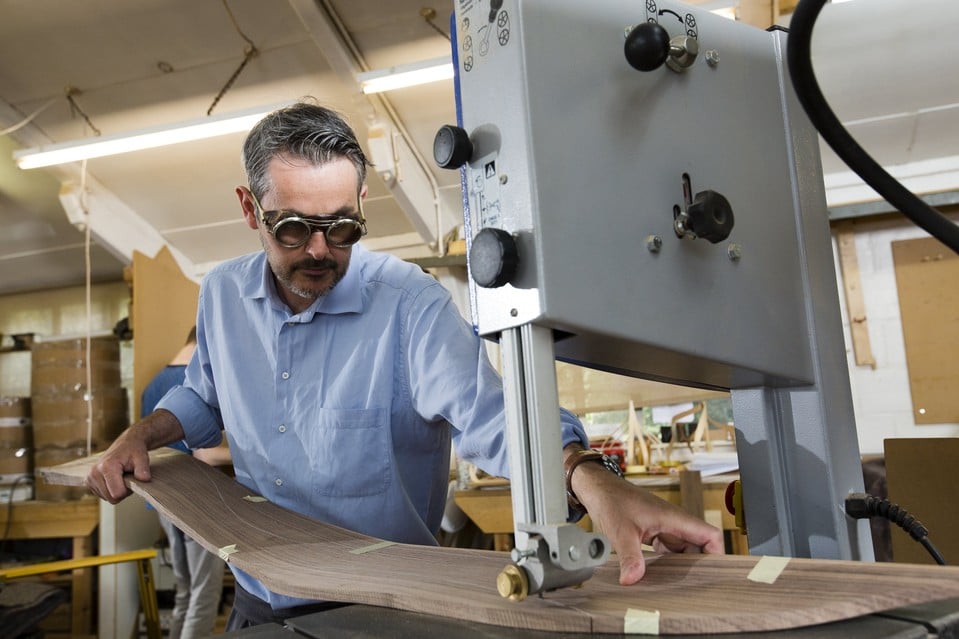 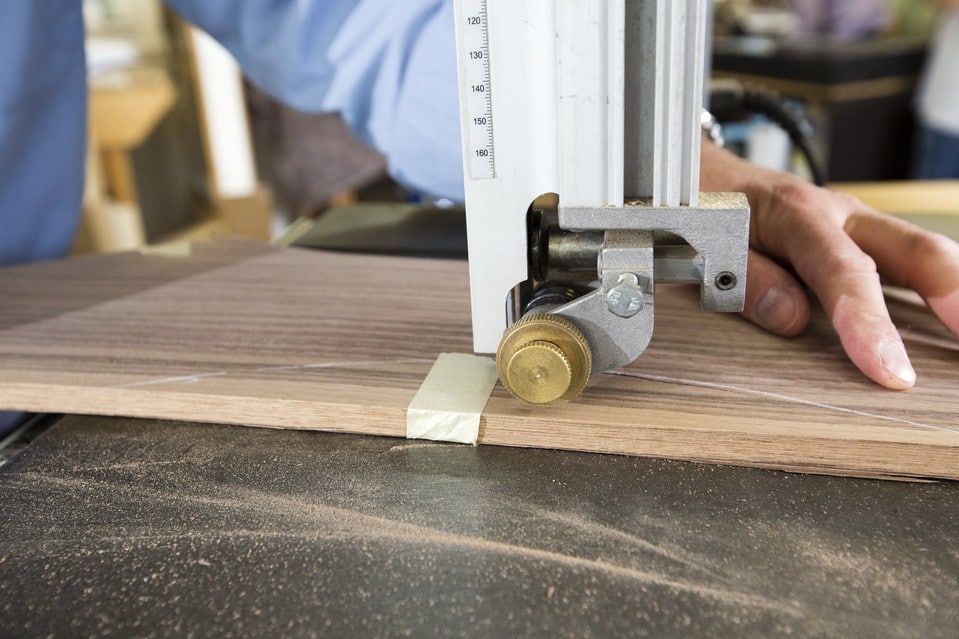 A piece of wood is cut to size. 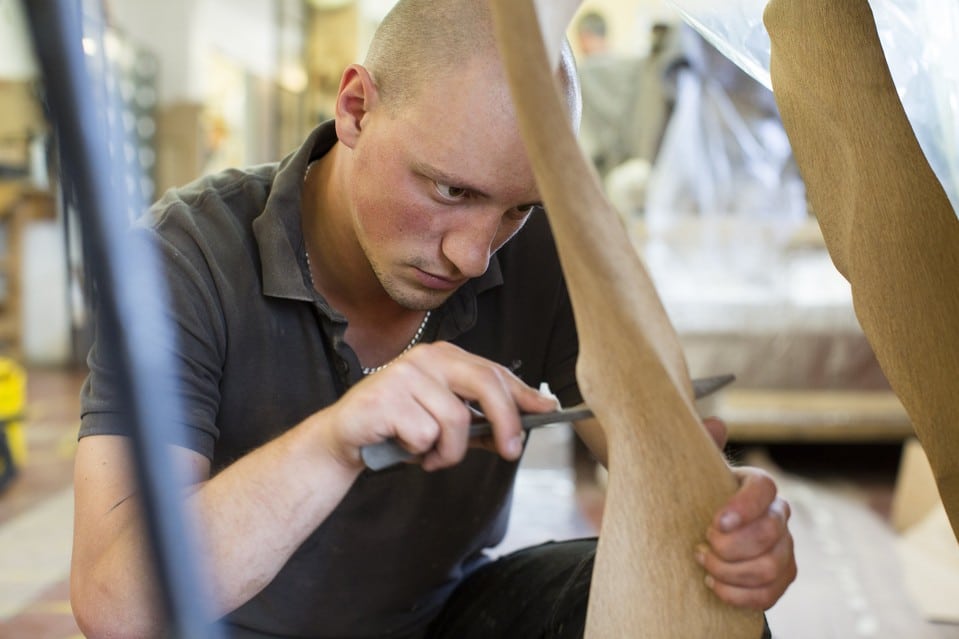 The studio has three full-time employees, as well as students from around the world who train with Mr. Fish. 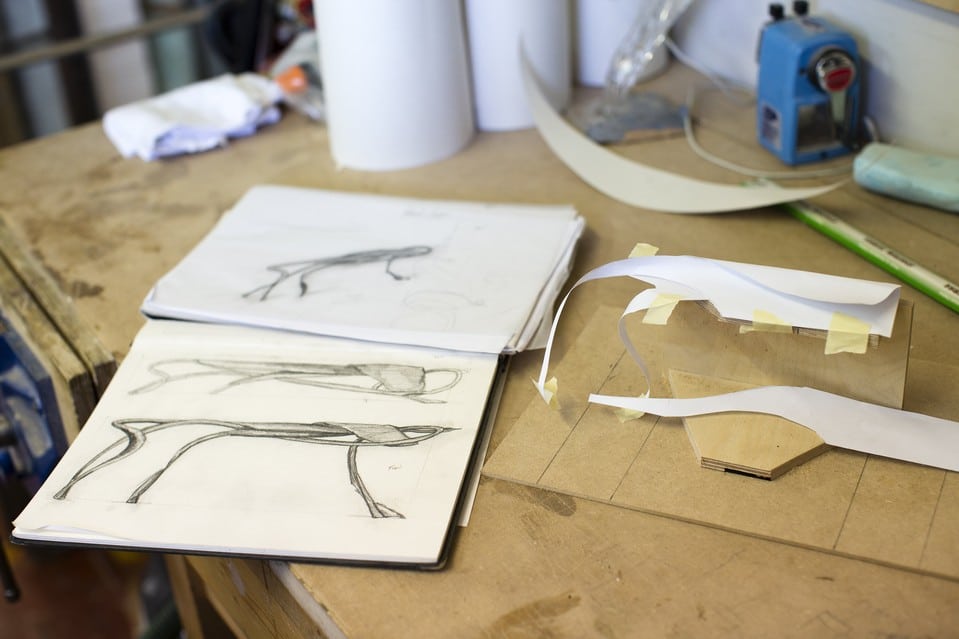 Early designs for a new piece of furniture. 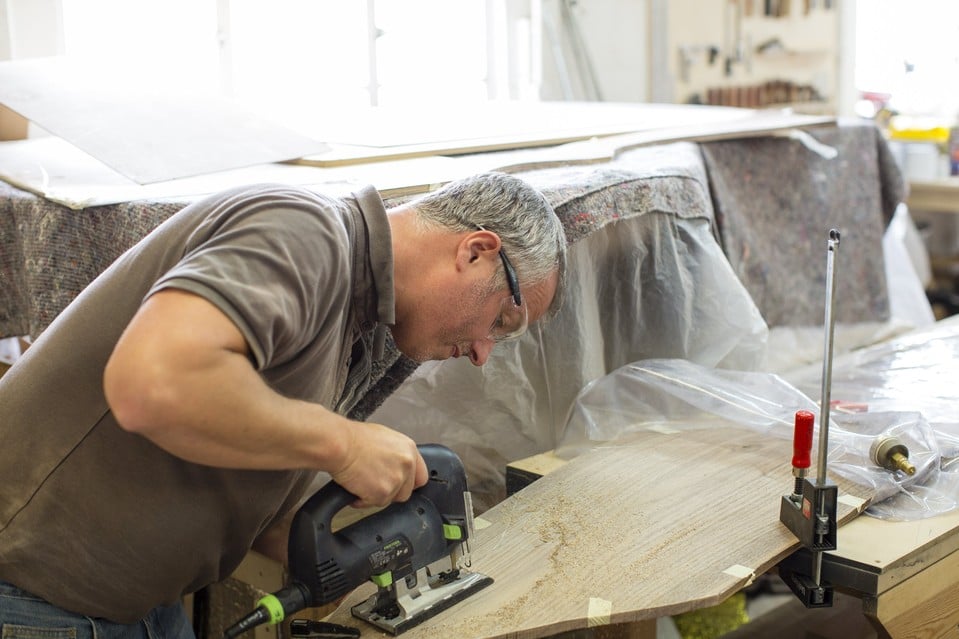 Each piece of furniture can take hundreds of hours of work. 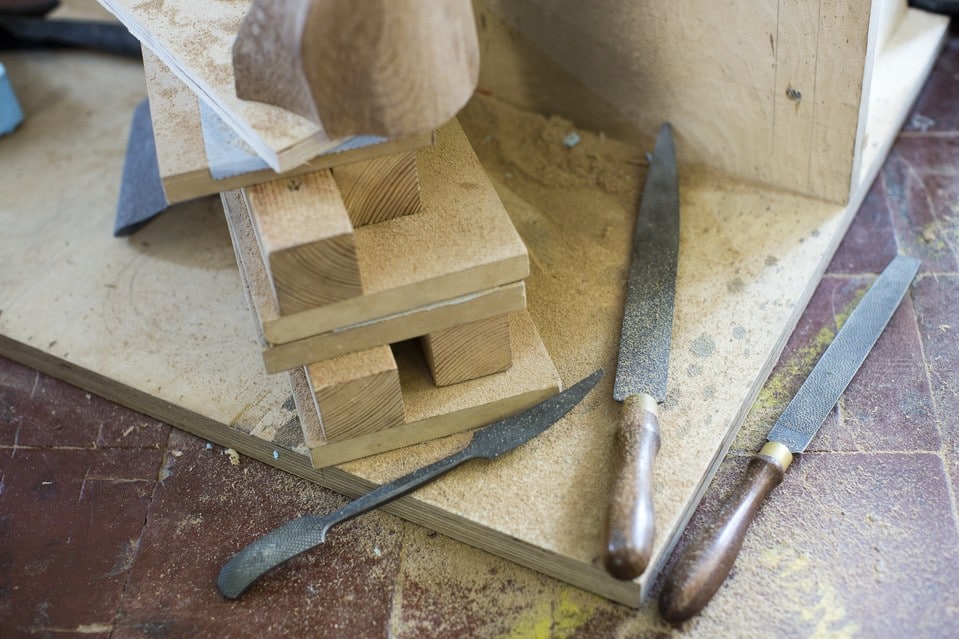 Some simple tools are used to shape wood. 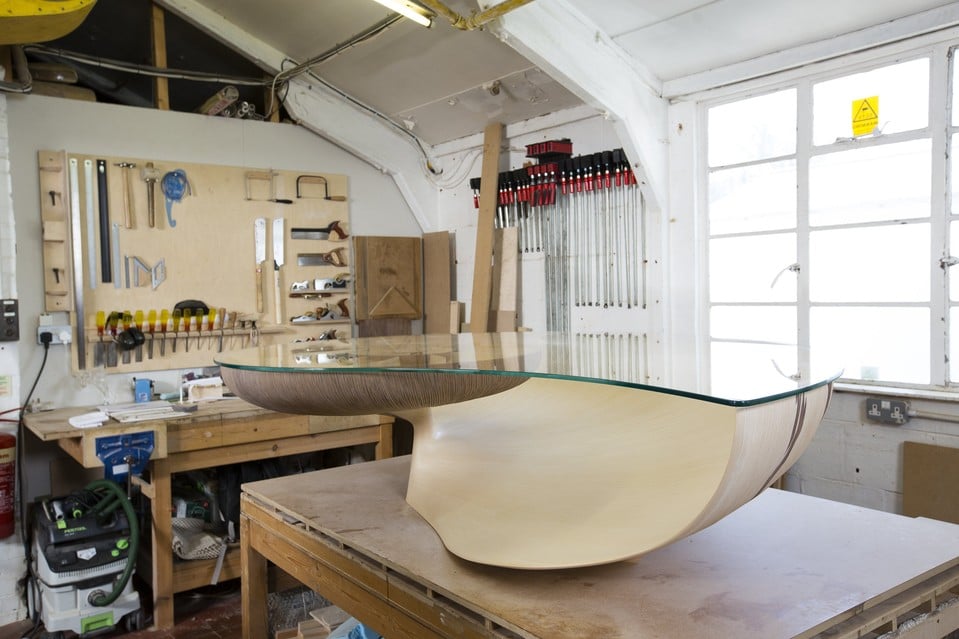 A Nautilus table, named for the shell that inspired its shape. 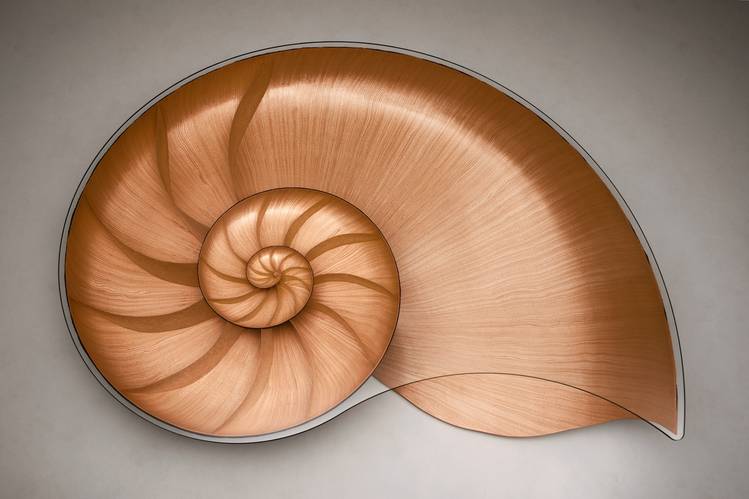 A view of the Nautilus table, from above, has a ‘shell’ carved from sycamore and is under a glass top. 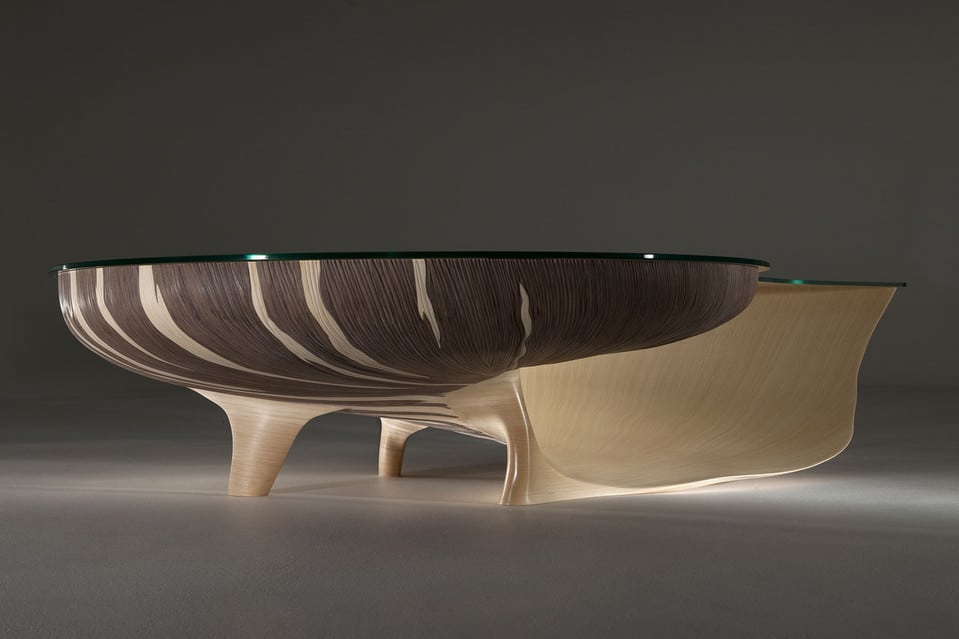 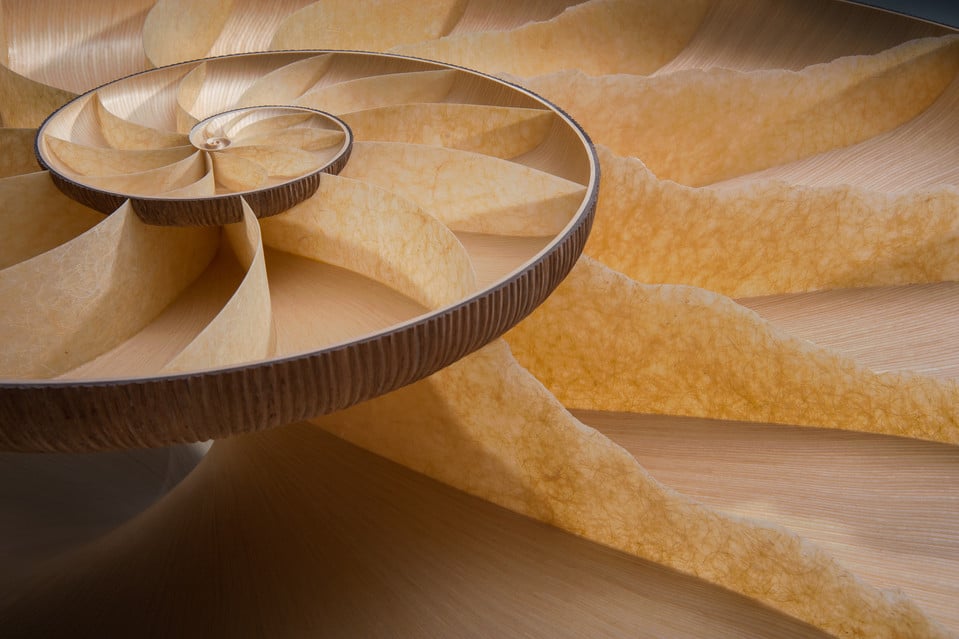 Delicate sheets of Japanese paper are used to create segments within the Nautilus table. 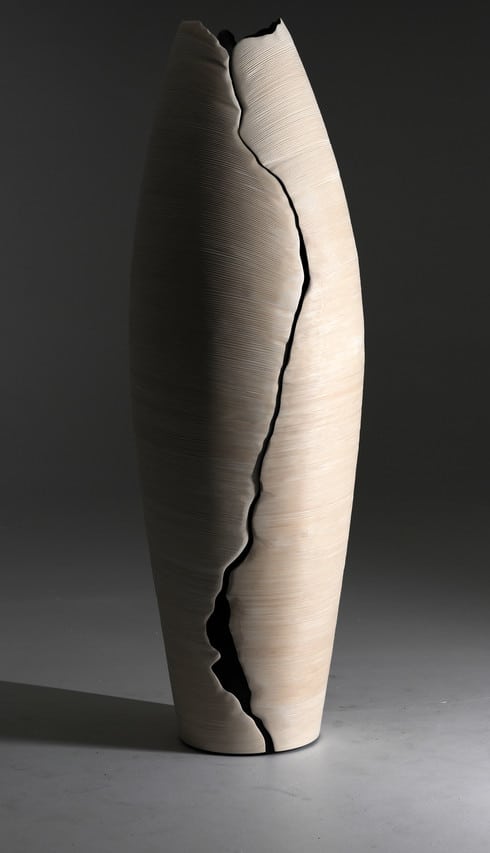 The Babel cabinet has a silhouette reminiscent of a cowrie shell. The pieces is priced at about $83,000. 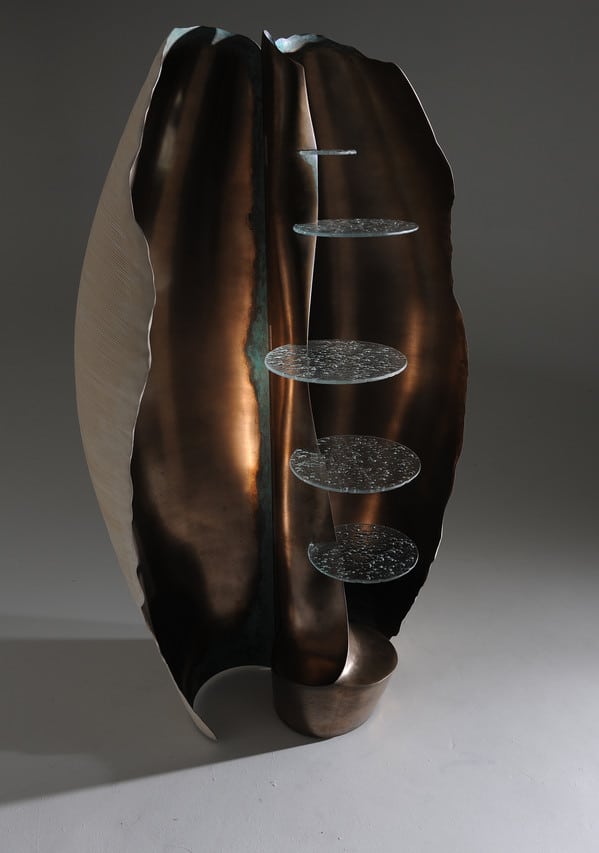 The Babel cabinet opens to reveal a bronze interior. 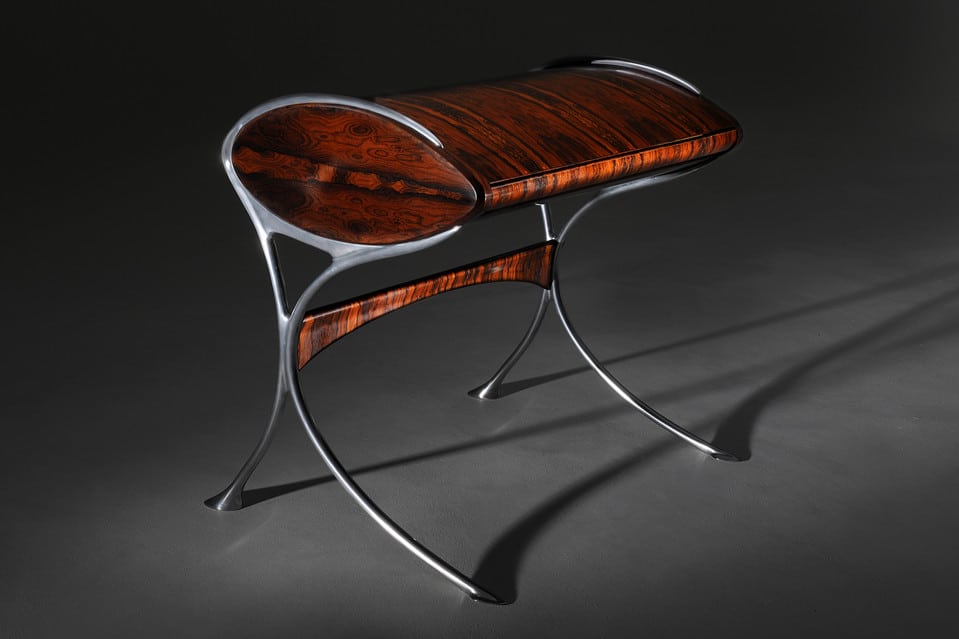 L’Orchidée desk, carved from rosewood with aluminium legs, is inspired by the Louis Majorelle design. 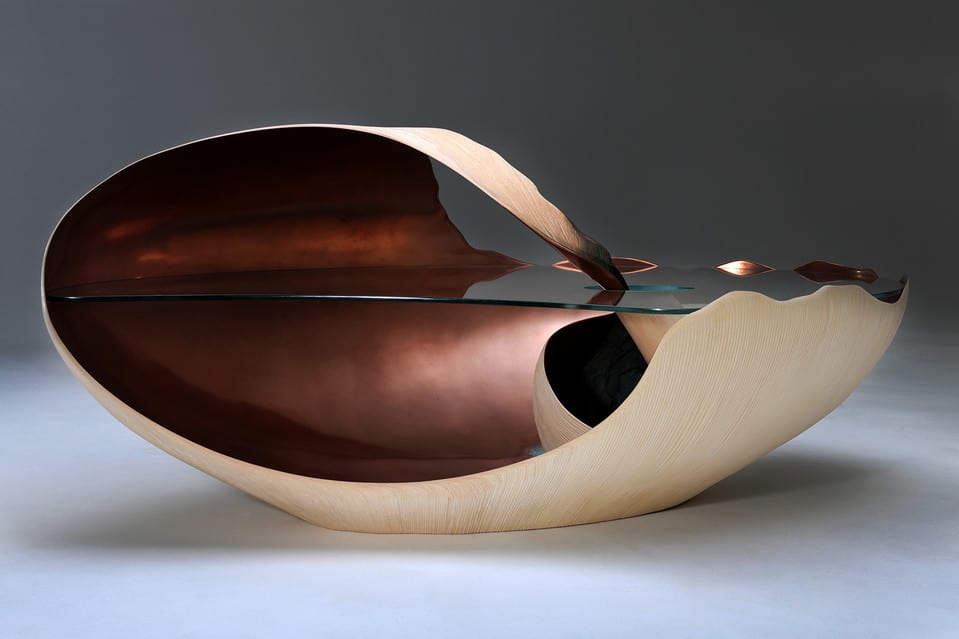 The Mollusque coffee table, with a sycamore base lined with copper. 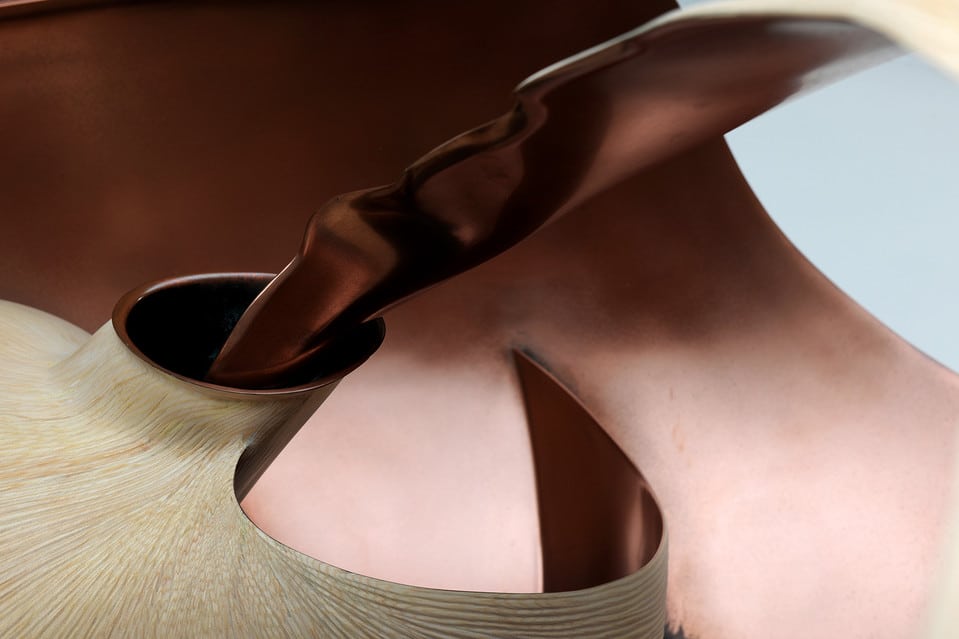 A detail of the Mollusque coffee table. 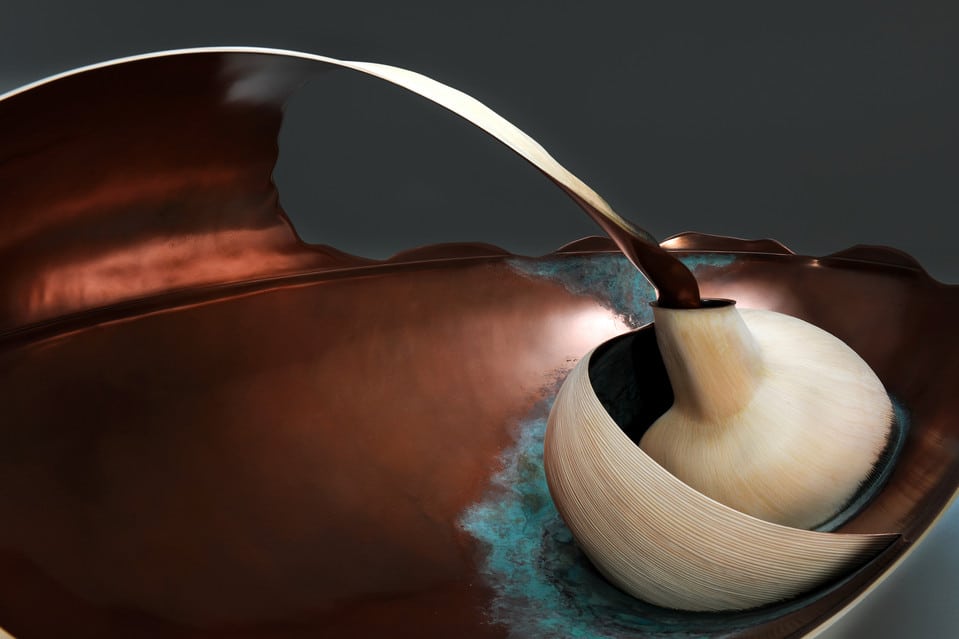 The Mollusque table is inspired by the shells of mollusks. 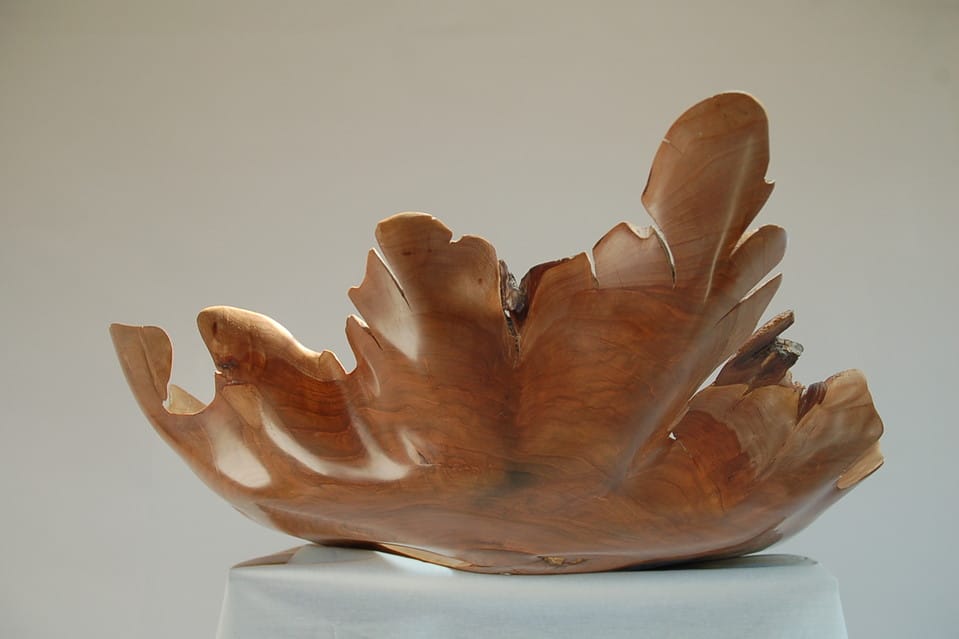 The cherry bowl, made of highly polished wood.

Marc Fish is a celebrated British furniture maker whose bespoke pieces can command upward of $150,000. But as recently as 2006, he was working for a handful of local clients and driving a taxi on weekends while searching for a creative direction.

Mr. Fish, now 44, found inspiration from the sea—appropriate for someone who grew up in Brighton, on England’s southern coast. Today, he lives in Newhaven, about 9 miles from Brighton, with his partner, Vanessa Eley, a photographer, and their two young boys.

His life-changing moment came after a client asked him to design a coffee table for a seaside home, also on the south coast. The client wanted a piece that reflected the home’s coastal location.

Mr. Fish was at home, looking after his son, when he spotted on a shelf a nautilus shell that belonged to his wife. “I thought: “I wonder what it would look like if I cut it in half,” he says.

Intrigued, he bought a half-shell online for about $30. He liked what he saw: a pale, glossy spiral with separate segments. He pitched his client the idea of recreating the shell in wood with a glass top.

Nautilus 1, as Mr. Fish named it, took 1,200 hours to create from about 6,000 pieces. Working alone, he glued together thin pieces of sycamore veneer and pressed them into the shape of a shell. Delicate sheaves of Japanese paper, made of bark fibers, were placed to create the segments.

Soon, he also was making furniture out of metal. “When I look back now it is all very crude; I thought it was great, of course,” he says.

Then he met Ms. Eley, now 42 and the mother of their two boys Willow, 8, and Huxley, 6 months. Ms. Eley’s approach to her photography changed how Mr. Fish thought about furniture making. “I learned about the need to constantly question your work,” he says. “Everything has to be considered, every shape and every curve and every edge.”

In 2009, Mr. Fish had a piece he was proud of: an elegant curved rosewood desk with aluminum legs and distinct Art Deco lines. He took the desk to a U.K. exhibition, where it garnered the attention of other furniture makers and the press.

But it was the success of Nautilus two years later that truly helped his career take off.

Today, he has a 2,600-square-foot workshop—a postwar depot once used to produce lunches for schoolchildren. He has three full-time staffers and trains artisans who come from all over the world to study at his studio. He is now represented by Lamberty Antiques in London and Todd Merrill Studio in New York.

After Nautilus, the seashell theme continued. He created Babel, a wooden cocktail cabinet with a simple curved form reminiscent of a cowrie shell that opens to reveal a bronze interior. It costs about $83,000. The Mollusque, another coffee table, suggests a sea snail. It is built from sycamore and copper resin and is priced around $83,000. One of his latest projects, called One Piece, is a $23,000 wood console table that looks like a single ribbon of seaweed and can be bolted to a wall.

Because Mr. Fish wants his creations to look “grown and not made,” there are no joints and no traditional joinery in his works.

“These are complicated pieces which look very simple—that is the thinking,” he says.