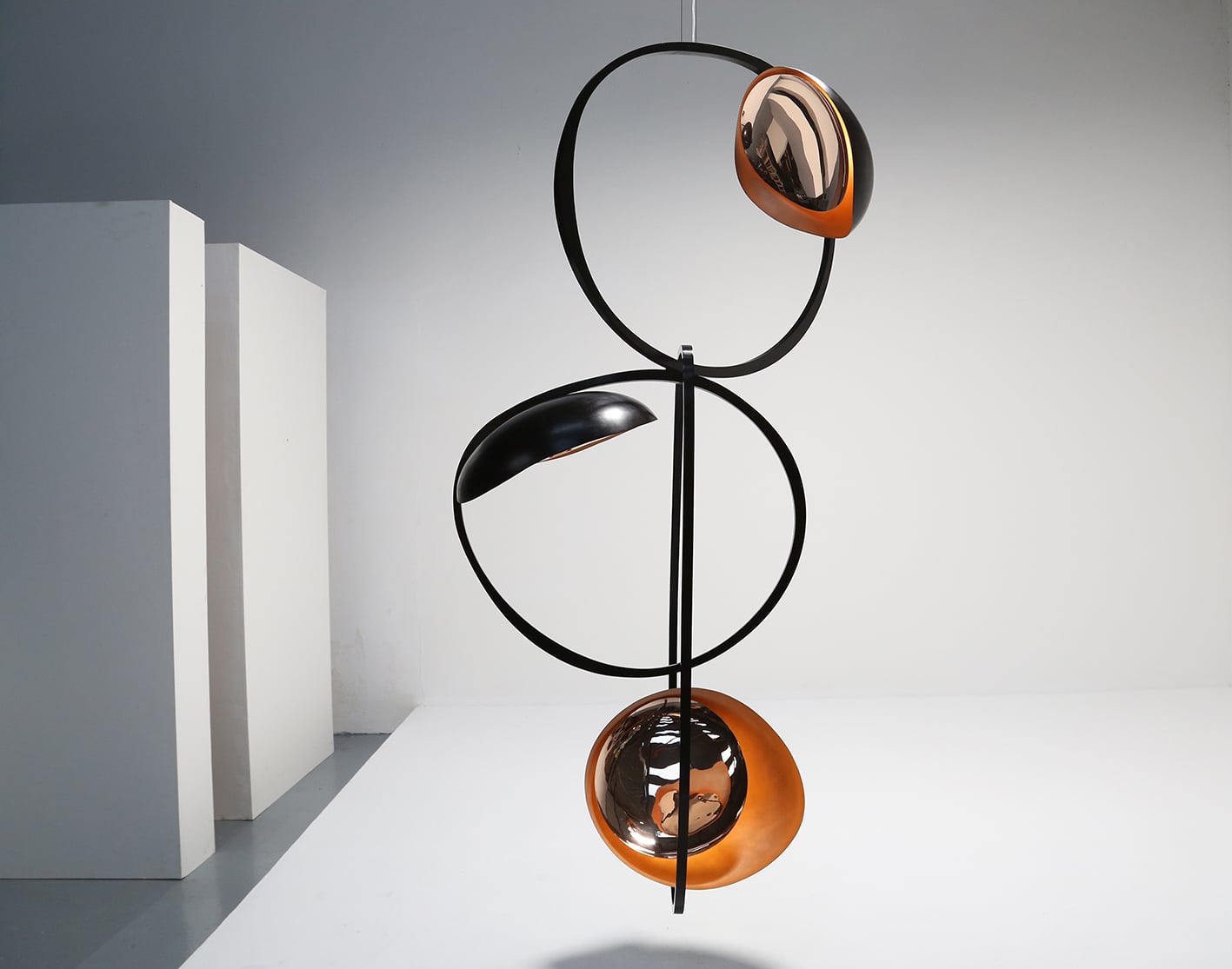 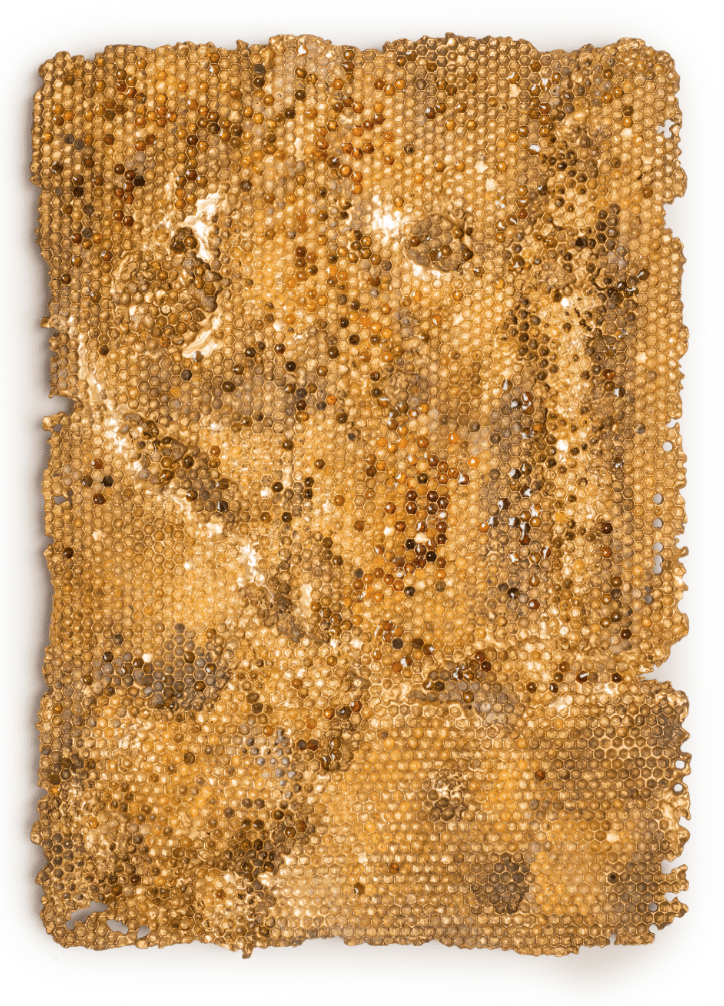 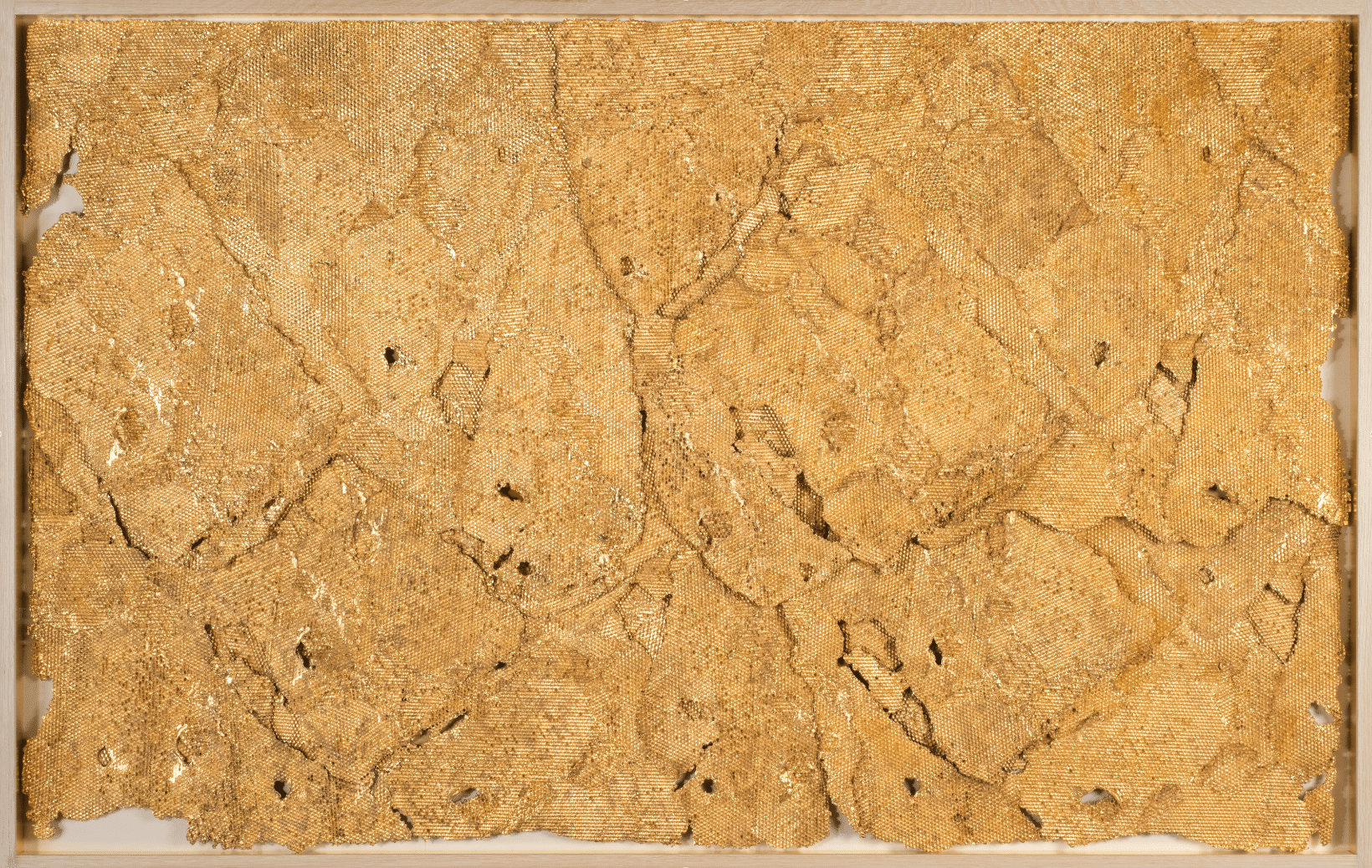 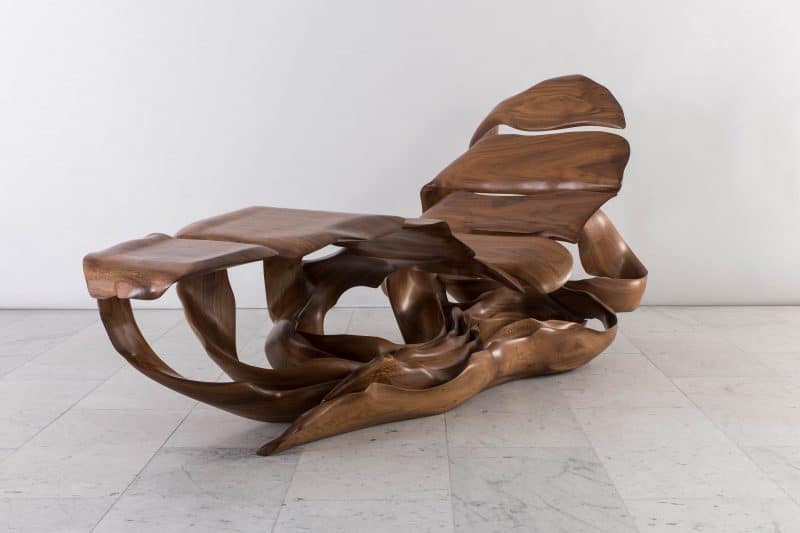 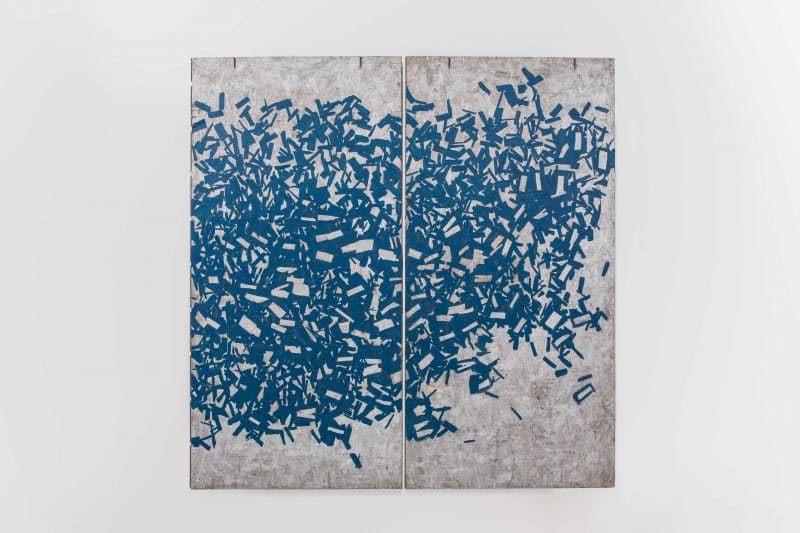 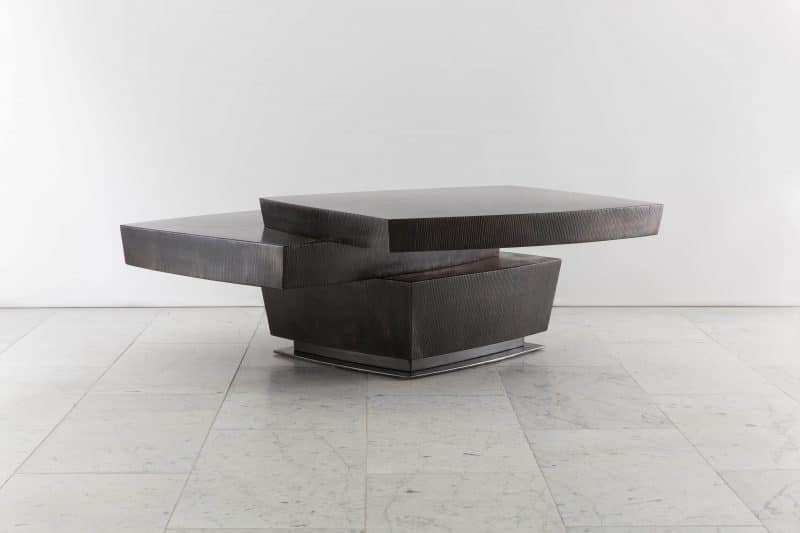 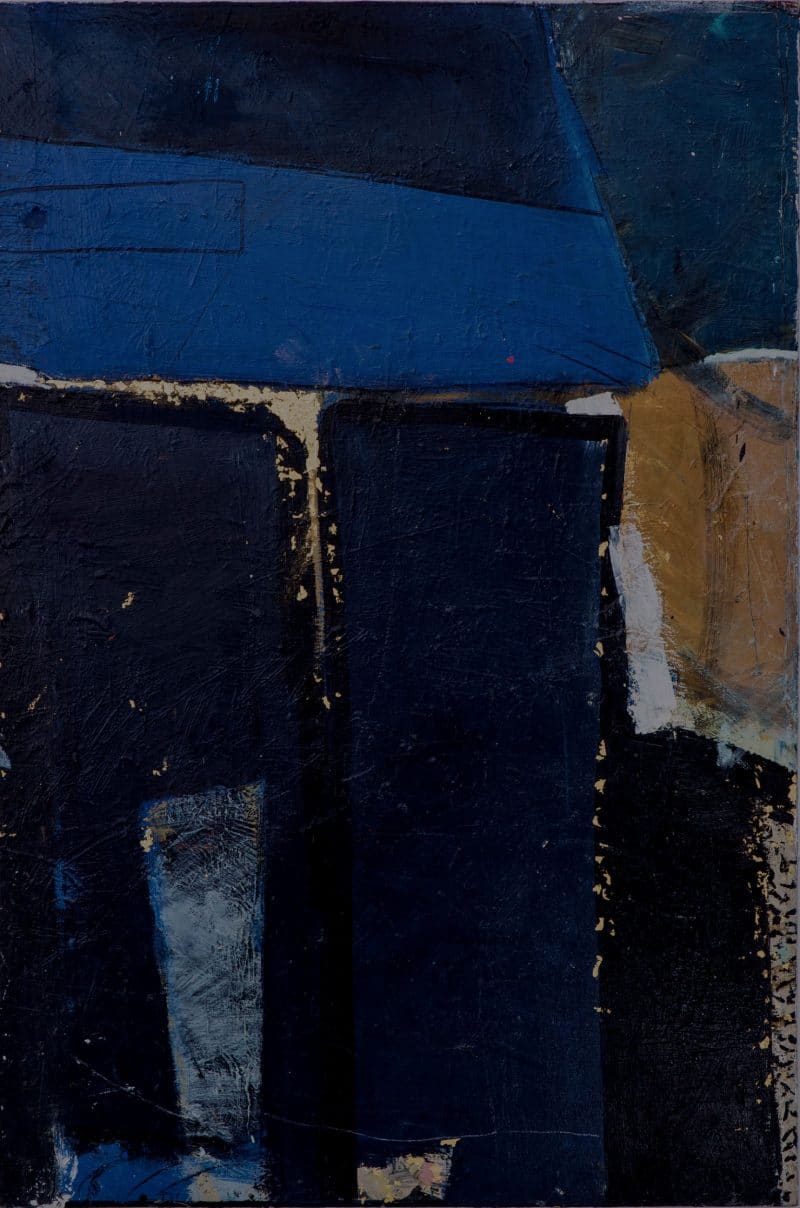 New York, New York— At The Salon: Art + Design, Todd Merrill Studio will exhibit a collection of unique, material-driven works from nine artists working with the most refined and innovative techniques across metal, wood, ceramics and LED.  While the works shown are definitive of the 21st Century, implementing new technologies, they also frequently reference the past whether through historical technique or visual aesthetics. The artists included in the exhibition share a similar focus of viewing the natural world through historic interpretation.

Central to the booth’s focus will be a spectacular new monumental LED and bronze light sculpture by Irish artist Niamh Barry. This large suspended light sculpture, Black Poise, floats effortlessly in perfect harmony of material and form. The suspended, sinuous structures are inspired by human movement and displayed so as to be experienced from every angle, igniting our own motion around them. This 7`-foot long work incorporates interlocking black patinated bronze rings with three hand-raised bronze vessels. The interiors of the vessels are finished in polished copper and illuminated by a glow of hidden dimmable LED lights.  As in Barry’s celebrated earlier works, Black Poise is a feat of handcrafted metal work, perfectly illuminating Barry’s mastery of balance and movement.

Todd Merrill Studio is pleased to announce that it is now representing artist Sophie Coryndon. Coryndon’s work is inspired by elements of the natural world and rooted in historical aesthetics ranging from renaissance tapestry to the influential Bloomsberry group. Croydon works and lives in the same area as the Bloomsbury Group at South Downs National Park, thus continuing the spirit of the quiet revolution against tradition in favor of natural sustainability. Imaginative and innovative, Coryndon has forged a successful career of combining traditional craft skills and specialist finishing techniques in a fine art realm.  Often material and process driven, employing multiple disciplines such as bronze casting, painting, embroidery and sculpture, her work has found a large audience with collectors and designers internationally.

On view at Salon are recent works of Coryndon’s that masterfully explore the exquisite nature of honeycombs using cast bronze, gilded plaster as well as precious and semi-precious stones. Coryndon, who says that natural forms are always at the heart of her work, became interested in bees after reading about the rising detriment facing the insects around the world today. In an effort to capture abandoned “ghost ship hives” Corydon is using lost wax casting, an ancient and seldom used technique.  Though bronze is regarded as a robust medium, in Coryndon’s hands the material takes on a jewelry-like delicacy. Honeymoon, 2016, a suspended cast bronze sphere with a faceted honeycomb texture is the first in a series based on 18th century witch balls.  Spinning like a ballroom mirror ball, Honeymoon is suspended and rotates on a vertical axis reflecting its intricate golden facets when lit. Tapestry, 2016, a large-scale wall hanging is constructed of deeply faceted overhanging layers of plaster honeycomb, gilded and highly patinated.  The substantial overlapping layers of the work gently hang giving the work the feeling of fragments of luxurious ornate textiles. At once colossal and fine, Tapestry beautifully preserves the fragility of its source much in the tradition of observation hives.

Coryndon spent her formative years working alongside her father at the legendary Coryndon Cabinet Makers. Like the Omega artists who came out of the Bloomsberry group and also rebelled against the plainness of mass produced consumer goods, Coryndon took the traditional applications of her royal cabinetmaker father and expanded them through experimental processes that push the possibilities between decorative and fine art.

In keeping with the inspiration of organic forms Todd Merrill Studio will exhibit a group of delicately handcrafted works by Marc Fish.  Much like Coryndon, (whose studio is located a mere two miles from Fish’s) Fish is constantly striving to transcend the barriers of art, design, sculpture and furniture. His sublimely unique works possess a timelessness that could be found seamlessly in the most contemporary of settings to the most traditional.  Exploring the Victorian obsession with natural history these one of a kind pieces are created through an incredible mastery of the most refined practices in micro stack-lamination today.  While the curvilinear forms of Fish’s works echo Art Nouveau, his process pushes the limits of 21st Century furniture design.

Laminaria Chaise is made from American black walnut veneer, which is manipulated into sinuous layered shapes through a process of micro stack lamination, which is cold carved.  This piece furthers the artist’s exploration of twisted seaweed forms, as its title Laminaria, a genus of seaweed, suggests.  At once an exceptional work of art and a functional object, the Chaise reveals the artist’s hand at work, while exuding a seemingly organic, unprecedented form.

New York based contemporary sculptor Erin Sullivan, works in much the same space as her Bloomsbury influenced U.K. counterparts. Sullivan presents a selection of new wall-mounted works cast in bronze (using the lost-wax technique) that again are intricately textured and tactile, drawing from organic, landscape, and undomesticated life forms.

Her pieces are defined by their intricately detailed surfaces, as well as by the versatility of those forms: Sun and Moon, an immense bronze relief contrasts turbulent, twisted forms cast from actual lava rock with gentle slopes and folds reminiscent of an undisturbed stretch of beach to present a metaphorical “sun” rising over a “moon.” The entire sculpture with its ceremonial monumentality radiates a warm glow from embedded LED’s, while a curtain of horsehair dramatically descends from the base of the bronze. Sullivan’s continuing repertoire offers a visual, elegant equilibrium between artifice and nature.

Chris Rucker’s minimalist designs, made from recycled construction materials, such as oriented strand board, an engineered wood created from fast-growing trees, disrupt their material’s original ephemeral purpose, transforming them into sustainable works of art.

Elevating the material into a new context, the complex composition of the board’s surface is brought to life through Rucker’s painted applications of blue “tape” against the natural presences of the wood. After a period of exposure to natural elements the panels take on an aged silvered hue.  Rucker’s panels, with their exaggerated verticality and metallic accents, share a kinship to the decorative Japonais screens prevalent during the Aesthetic period. The abstract forms can appear as a representation of nature, conveying movement such as butterflies in flight or a wave in ascent.  The fashionable restraint of Japonica, with its open spaces and understated forms is mirrored in Rucker’s safety panels.

Markus Haase’s table, titled Aeolian, is inspired by ripples in windblown sand, epitomizing the sculptor’s distinct approach to fluidly melding stone and wood together. The artist’s two decades of experience as a sculptor are evident in his masterful treatment of materials, where smooth undulations of bleached ash appear as malleable as drapery as they curve in convex and concave forms beneath a hand-carved grey and white marble top.

Haase, who began his career doing historic restoration, embodies the independent artisan creating one of a kind works without the aid of a studio of assistants or fabricators.  Each piece has the distinct marks of the maker’s hand from his fluidly carved console tables to his celebrated light sculptures that mimic natural forms such as antlers or stalactites. Haase demonstrates his virtuosity of materials through his aptitude to imbue wood and stone, separately or together, with an almost preternatural sense of fluidity and movement.

Like Haase, Gary Magakis has a commitment to small production that allows his work to fully represent his personal ideals of nature inspired design. The bold and dense geometric forms of Magakis’ latest works exude elegant, buoyant elements of Modernism while drawing inspiration from his surrounding landscape.

Magakis channels architectural elements in design while tapering each of his forms uniquely. The two Stacked Low Tables on view project a pleasing weight and gravity.  Like large, flat, river stones, the forms that make up the tables’ level planes casually reference the centuries old stone walls that populate Magakis’ rural surroundings in Pennsylvania. The density of the silhouettes is juxtaposed with a cantilevered weightlessness giving the tables a sense of playfulness while retaining a muscular visual power. Though the tables’ sections appear sharp at first glance, they are actually gracefully curvilinear.

Molly Hatch’s newest plate painting was crafted by sourcing Chinese patterns from Owen Jones’ iconic 19th century archives of ornament and decoration. The installation extends Hatch’s series of works wherein the artist explores the relationship between the historic and the contemporary through the deconstruction of traditional pattern. The historic floral pattern is re-contextualized through painterly brush strokes over 54 hand-thrown porcelain plates. Hand-painted with glaze, under-glaze, and 11K gold luster, each plate reveals Hatch’s unique approach to painting, through abstracted lines, bold forms, and captivating plays between positive and negative space.  Together, the plates form a unique wall installation, reawakening interest in the historic through a 21st century technique and aesthetic.

Hatch’s work has been widely collected, commissioned and exhibited. Physic Garden, a monumental 456-plate painting, was installed at the High Museum of Art in Atlanta, this Spring.  Hatch is currently working on a large-scale installation for the Newark Museum.

Also on view will be a recent work from New York born and based contemporary artist Ezra Cohen.  Cohen is a known for his large, powerful abstract paintings. At the age of 16, Cohen began studying under noted Abstract Expressionist artist Knox Martin at the Art Students League of New York.  His lasting association with Martin has uniquely informed Cohen’s approach to color and composition. Cohen strikes a masterful balance between chaos and control, frequently referencing the golden ratio.

In Dawn, Cohen shows a masterful complexity in structure as deep blue, black, and earth toned boulder-like forms push against each other, separated by crevices of 24 carat gold leaf, creating a dense composition of surprising depth.  Much like Gary Magakis’ sculptural works, Dawn, achieves a pleasing sense of gravity and place.

Cohen’s paintings have been exhibited in numerous New York art shows and are represented in over 30 collections across the United States and Europe.

Through an exploration of natural influence, Todd Merrill Studio continues to celebrate the best of studio driven artists bridging the gap between art and design and traditional techniques and modern innovation.