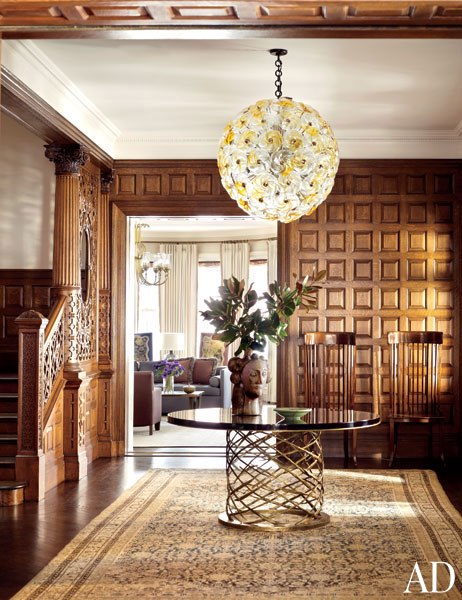 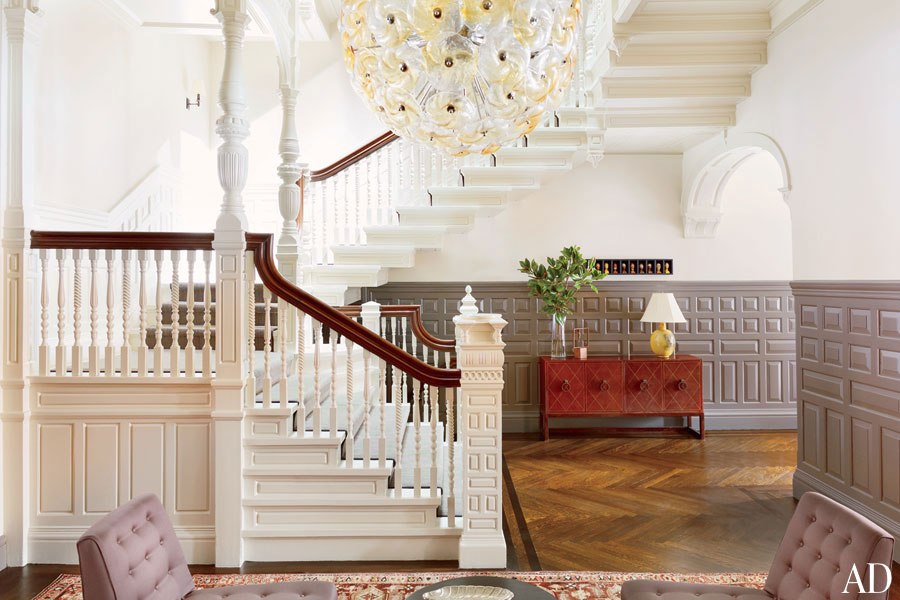 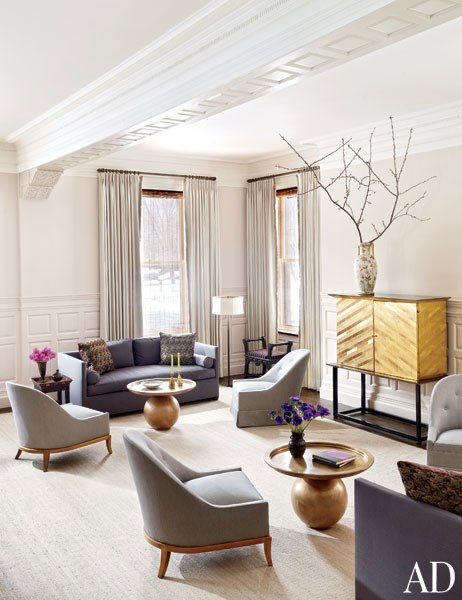 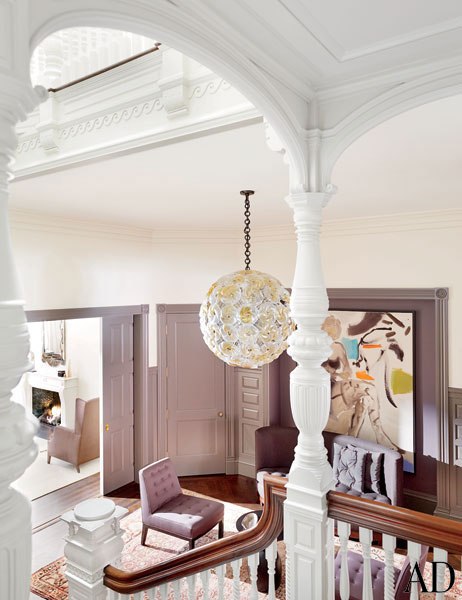 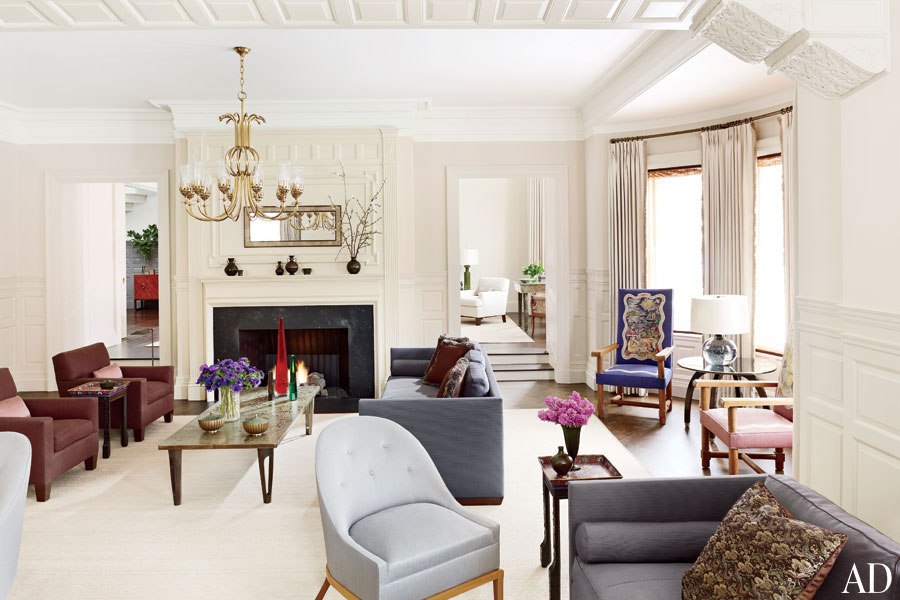 FORMAL LIVING ROOM
In the living room, a 1950s Bjørn Wiinblad chandelier hangs above a Philip and Kelvin LaVerne cocktail table from Donzella 20th Century Gallery and bespoke club chairs by Hayes clad in a Clarence House linen; the mirror over the fireplace is ’60s Danish, the oak-and-tapestry armchairs by the window are ’30s Jacques Adnet designs, and the table lamp is by Deborah Czeresko. A pair of T. H. Robsjohn-Gibbings chairs stand in the foreground, the cloisonné tray tables are from H. M. Luther, and the sisal was custom made by Beauvais Carpets. 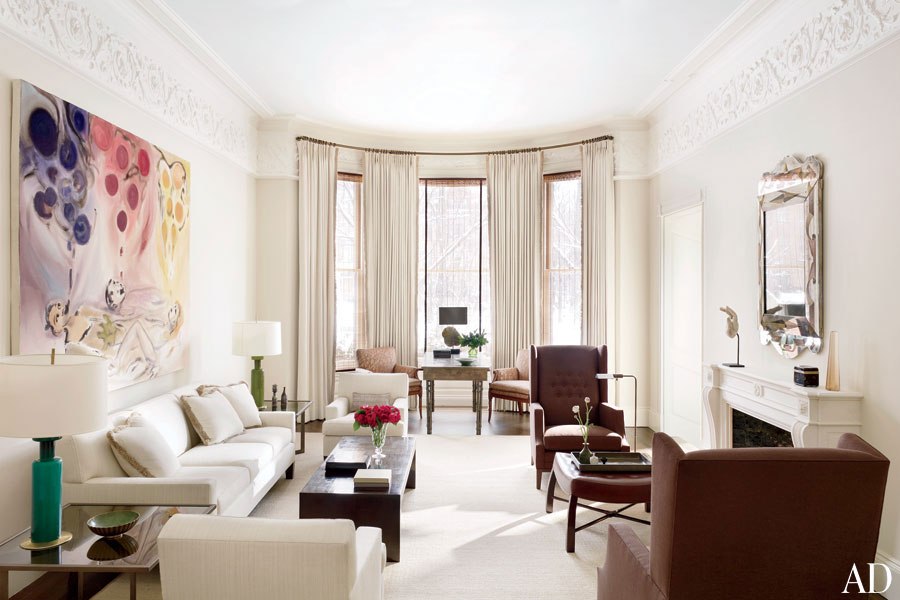 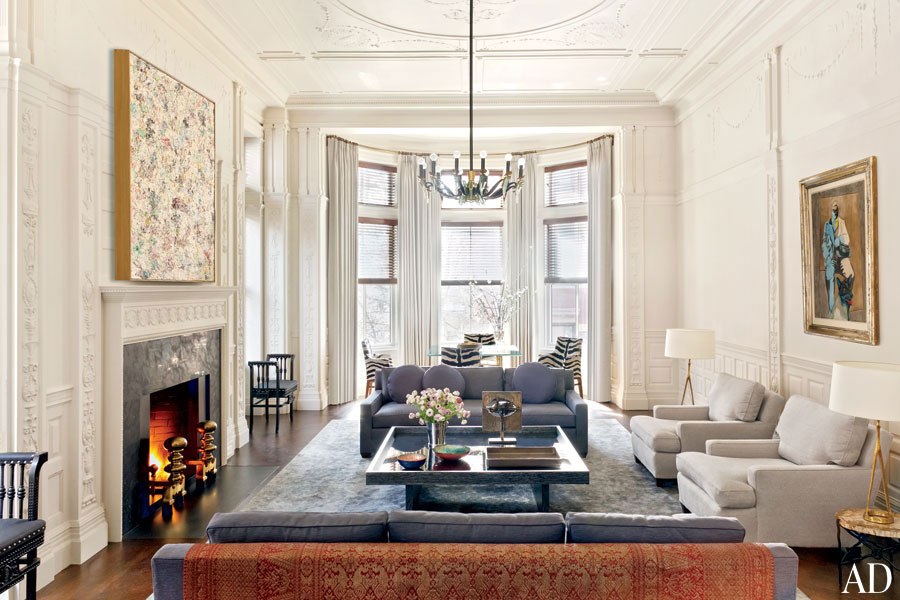 SITTING ROOM
A sitting room features a Dan Rees artwork (left) as well as a Hayes-designed cocktail table, club chairs (in a Classic Cloth textile), and sofas (in a Great Plains fabric); in the background, curtains of a Cowtan & Tout fabric complement vintage Wormley chairs upholstered in a Clarence House silk. 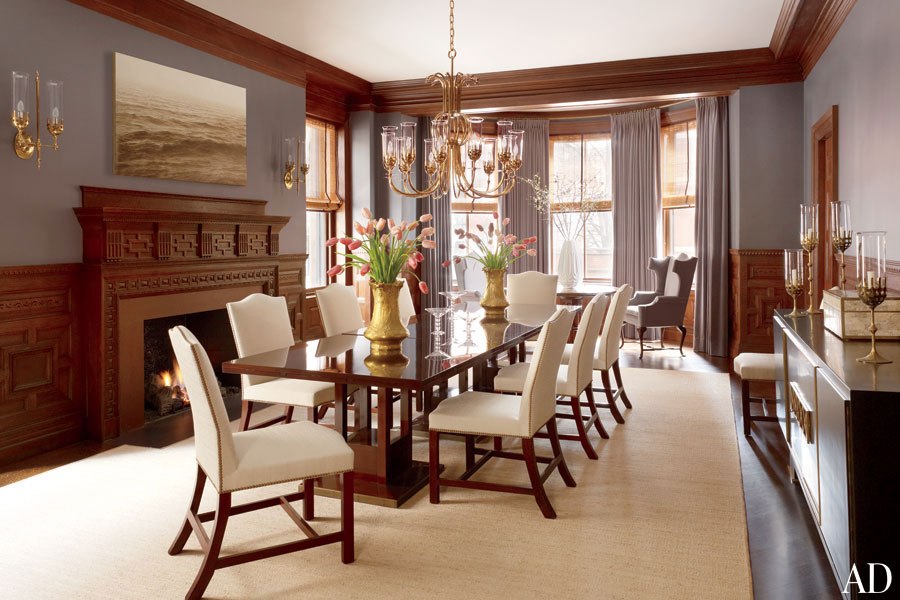 DINING ROOM
George III chairs clad in a Larsen silk surround the custom-made table in the formal dining room; the sideboard is by Jean Royère, the chandelier, sconces, and candlesticks are by Wiinblad, and the Art Nouveau vases are from Bernd Goeckler Antiques. 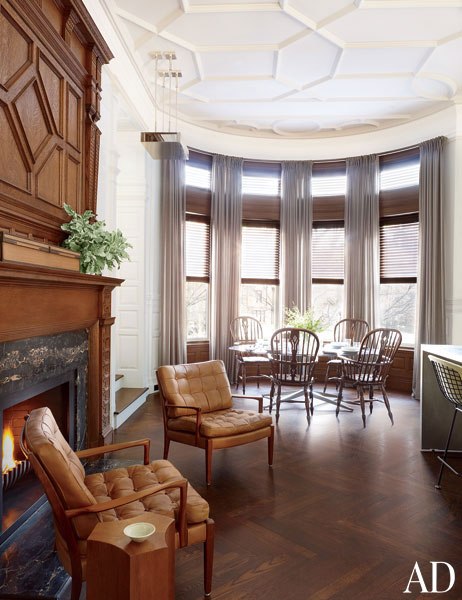 KITCHEN DINING AREA
Curtains of a Great Plains fabric frame the windows in the kitchen’s dining area; the dining table is by Knoll, and the midcentury lounge chairs are Swedish. 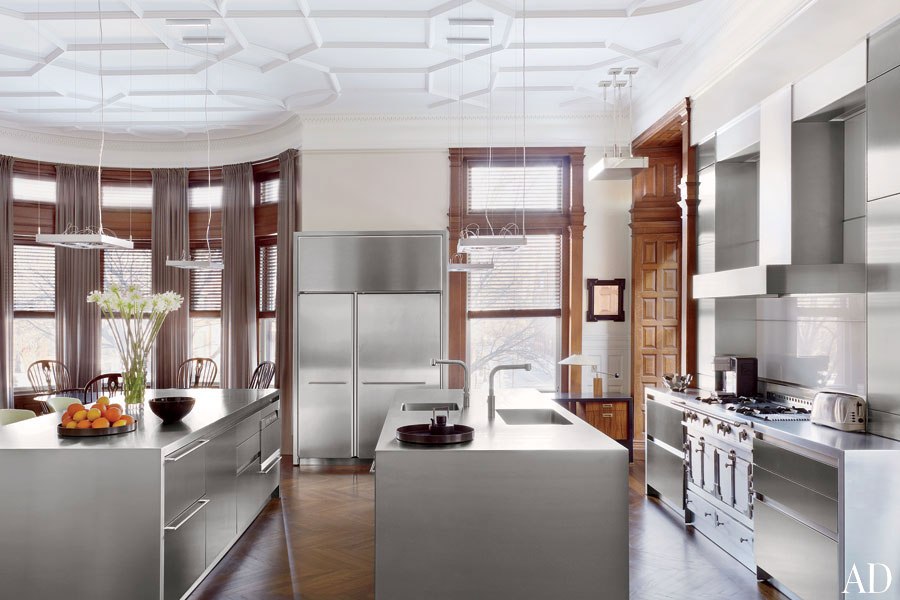 KITCHEN
The kitchen is outfitted with Bulthaup cabinetry. 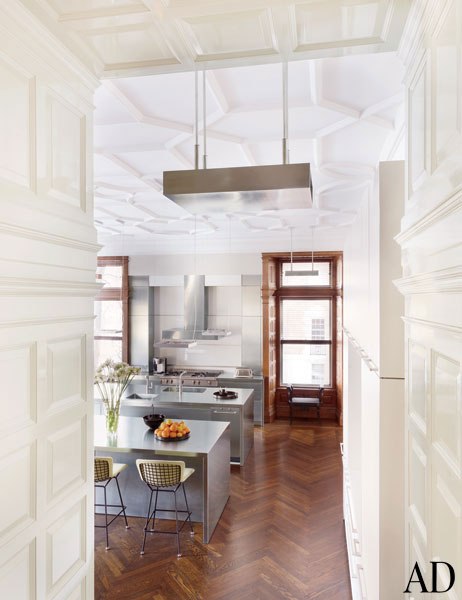 ONLINE EXCLUSIVE – KITCHEN
Another view of the kitchen and its plasterwork ceiling. 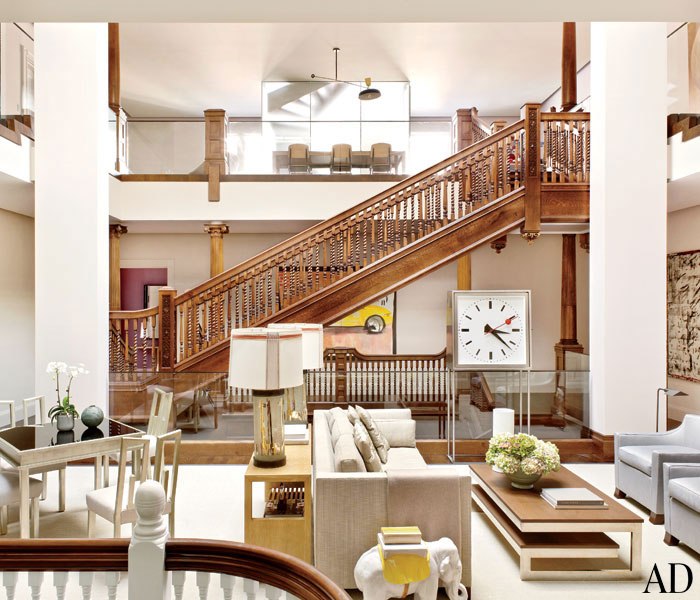 CENTRAL ATRIUM
A 1950s French train-station clock from Bourgeois Bohème stands beneath the original 1880s staircase in the central atrium. The table and chairs at left are vintage James Mont, the Hayes-designed sofa is upholstered in a Great Plains fabric, the vintage cocktail table is from Jean de Merry, and the sisal is by Beauvais. 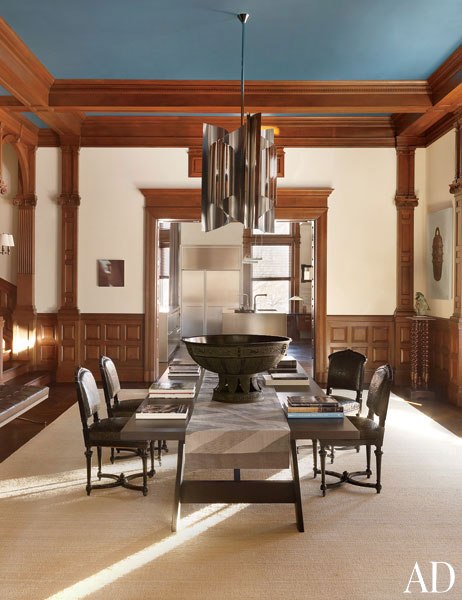 LANDING
On a landing, a 1970s Charles Paris light fixture is suspended above a table by Hayes and Aesthetic Movement chairs; the large bronze water bowl is Japanese. 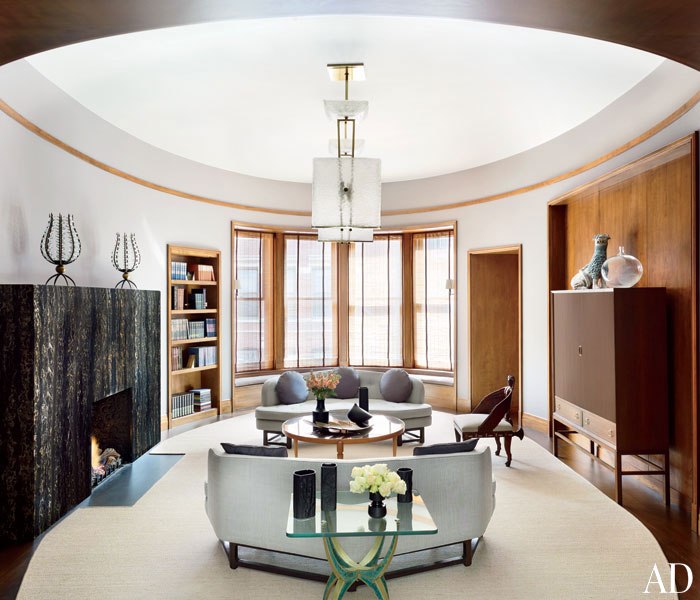 LIBRARY
In the library, André Dubreuil lanterns top the mantel; the ceiling fixtures are 1960s Seguso, the Edward Wormley sofas are covered in a Larsen fabric, and the pillows are made of a Donghia textile. 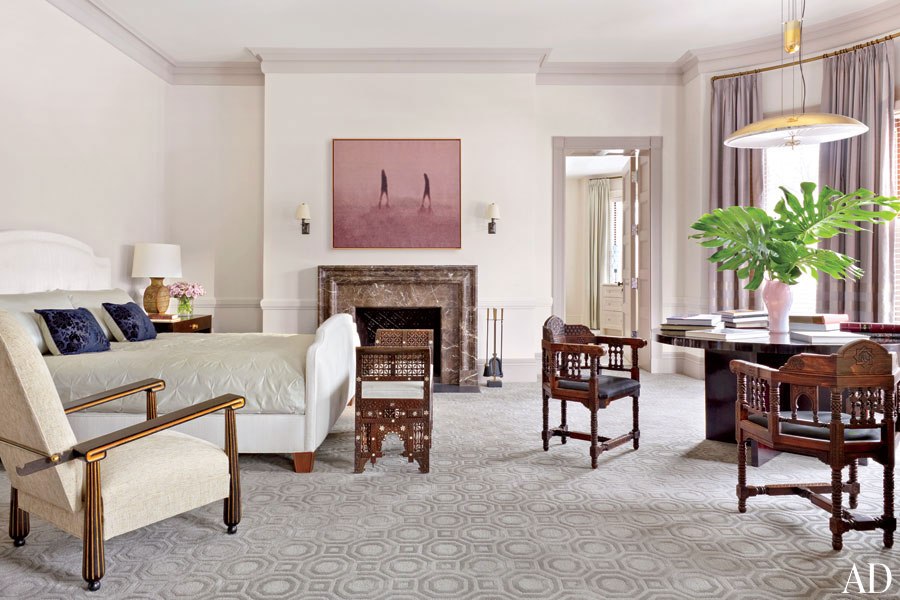 MASTER BEDROOM
In the master bedroom, a 1950s Austrian pendant light from Eric Appel is juxtaposed with late-19th-century Moorish chairs and a 1920s armchair attributed to Paul Poiret’s Atelier Martine from Bernd Goeckler Antiques; the carpeting was custom made by Tai Ping 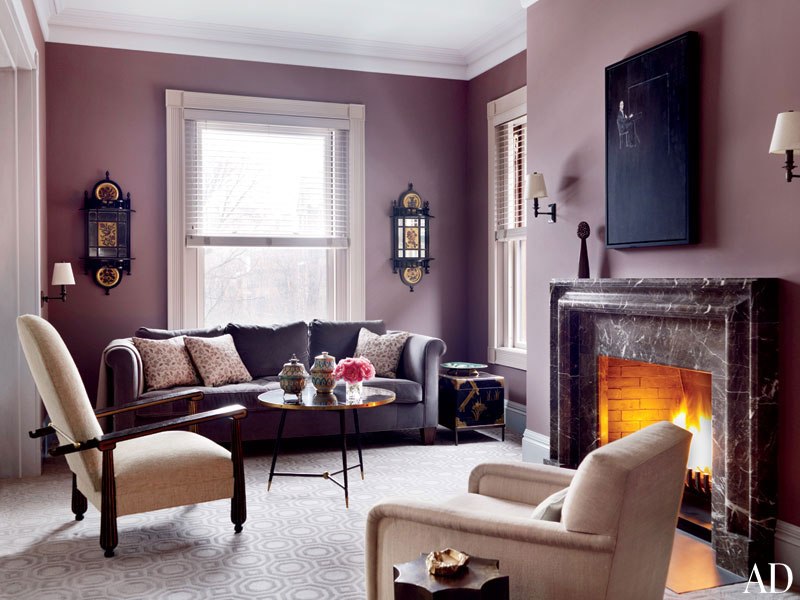 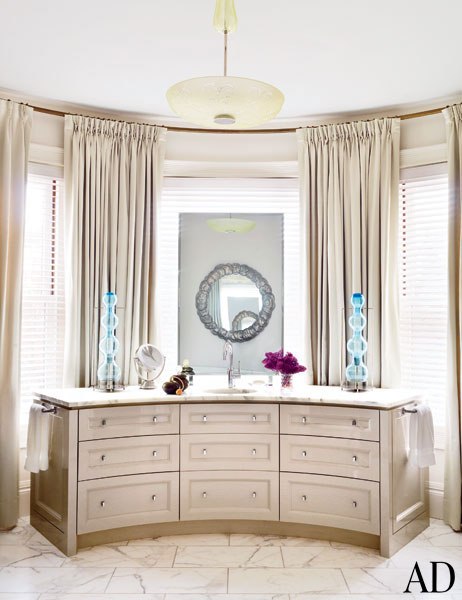 MASTER BATH
Curtains fashioned of a Brunschwig & Fils satin grace a master bath; the mirror is vintage FontanaArte, and the sculptural lamps are 1960s Venini from Dana John. 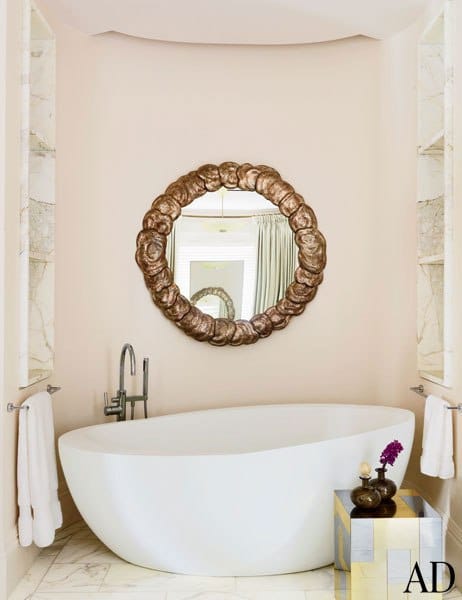 MASTER SUITE BATH
An 18th-century mirror is mounted above the Waterworks tub in one of the master suite’s baths; the cube table is vintage Paul Evans. 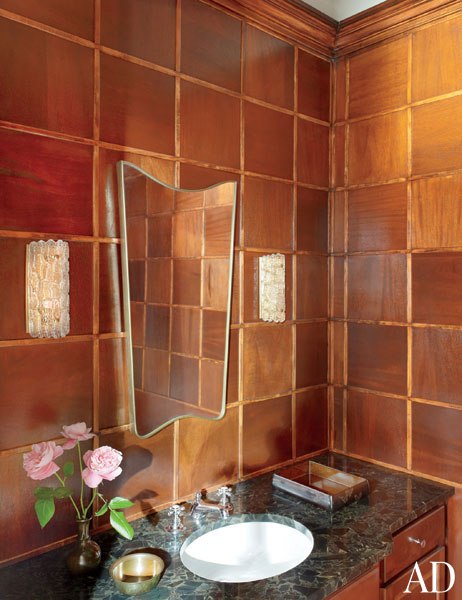 The interior designer collaborates with architect Dell Mitchell to recast a pair of townhouses as an extraordinary dwelling where Victorian grandeur meets easy modern elegance.

The patrician townhouses of Boston are famously discreet, but two historic brick-and-brownstone dowagers share an especially surprising secret that no passersby would guess. Behind their stately front doors and bow windows, virtually unchanged since the 1880s, a spectacular renovation has united the structures into a single six-bedroom private residence, thought to be among the city’s largest.

Both of the buildings, one five stories and one six, had been subdivided into apartments over their long history, and the current owners spent 13 years acquiring the individual units. Throughout that time, the couple lived in one townhouse, and then the other, with their three children, all the while falling deeper in love with the molded-plaster details and carved woodwork that had partially survived a ham-handed condo conversion and a disastrous fire. Though intent on preserving what remained of the work of Peabody & Stearns, the eminent firm that designed both townhouses, the couple told Boston architect Dell Mitchell and New York City interior designer Thad Hayes that they had no desire for period interiors. “Houses here tend to be either very Brahminish or are 1960s Seguso, in-your-face opulent,” says the financier husband. “We wanted something subdued, calm, and contemporary. I wouldn’t say minimalist—that can seem sterile—rather warm and open. I guess Thad would say edited.”

Such editing, though, demanded major revisions from the start. As Mitchell explains, “We needed to take both houses apart and then knit them together into one.” She sliced passageways and sight lines through the full-height bearing wall between the two buildings (Cafco Construction’s ingeniously hidden steelwork does the heavy lifting), inserted steps to bridge staggered floor heights, repaired or replicated vintage embellishments, and stripped later intrusions from classically proportioned rooms. The grander of two original staircases became the main link between levels that grow ever more modern as one ascends, from formal reception rooms on the first floor—generous enough to accommodate the owners’ philanthropic entertaining—to casual family areas and private retreats on the stories above.

That may sound as programmatic as a flowchart, but Hayes makes every room feel like an invitation to dance. Bow windows and concave walls embrace curvaceous tables and chairs. Custom-woven Beauvais sisals, which Hayes calls “a humble gesture underfoot,” lead a distinguished mix of furniture, art, and objects on a convivial promenade from dining room to living room to parlor to library. Unexpected partners appear at every turn. An Egyptian Revival armchair faces a pair of Edward Wormley modernist sofas. Antique Oriental rugs, a Brahmin standby, are rolled out beneath 1960s floral Sputnik chandeliers. The kitchen groups a Jacobean-style carved-oak chimneypiece with lean brushed-stainless-steel islands. Rather than steal the show, however, such encounters take their place within a larger choreography of color, texture, and scale. Says Hayes, “There’s layering and complexity, a kind of alternating current that seems appropriate for the project—timeless, too.”

Shifts in hue set the tone in different rooms. “We started out with a palette of blues, blue-grays, rust, and deep red,” Hayes says, “and that pretty much filtered through the first floor and up to the second.” Although the carpet in one sitting room and the ceiling of the adjoining staircase landing are both blue, the latter has a cerulean intensity that holds its own against the monumental mahogany woodwork, while the pale carpet cheerfully defers to delicate Adamesque wall reliefs. (The owners nicknamed the second-floor landing’s heroic ’70s Charles Paris ceiling fixture—a swirl of scrolling metal—the Batman Chandelier.) In the master suite’s alcovelike sitting room, Hayes matched the decor to what he calls the “seductive grayish purple-browns” of the stone mantel, but he inverted the dominant scheme of light walls and darker trim to enhance the nook’s cozy seclusion.

A surprising intimacy softens even the largest spaces. “Whether I’m doing a small apartment or something like this,” the decorator explains, “I relate the scale of furniture to the human body, not to that ’70s-California notion of the huge sofa with enormous arms in a big room.” All the same, Hayes is a master of proportional drama. Take the monolithic fireplace he designed in black Portoro marble for the oval library. “This room had been stripped down years ago, so we could have some fun with it,” he says. “We didn’t want a tasteful little mantelpiece. We said, ‘Let’s kind of pull it out of proportion, pump up the scale.’ ” As for Mitchell, her boldest move was the creation of a central atrium/family room. The skylit space rises from the third story (master bedroom and offices), through the fourth floor (where the children’s rooms are), and up to the roof garden. Besides dissolving boundaries between the two houses and channeling sunshine into their shared heart, the atrium is a hub where the family gathers and the two generations stay in touch during everyday comings and goings.

Hayes’s placement of a large midcentury rail-station clock in this domestic concourse is simultaneously off beat and fitting—a symbol that the family has truly arrived and is right on time. “Since we got married and bought our first condo, we never really had a place that felt like our ‘final’ home,” the husband reflects. “We moved every three years. We still had rental furniture, even when we were buying the components of this property. But this is the house we always wanted. And obviously, we’re not going to upsize from here.”