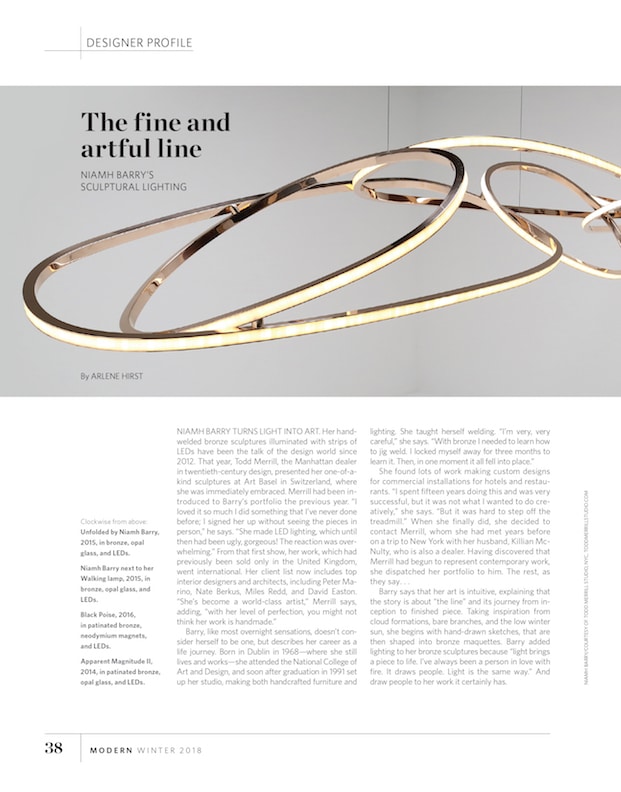 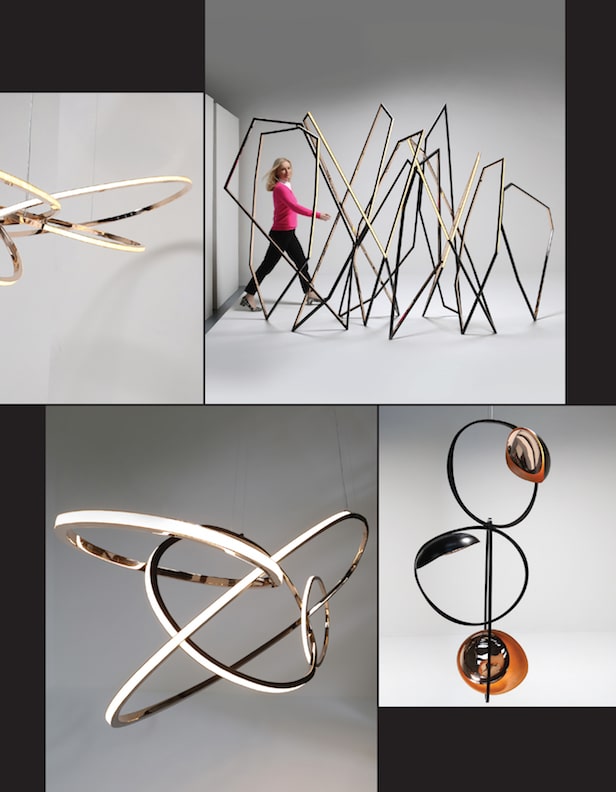 Niamh Barry turns light into art. Her hand-welded bronze sculptures illuminated with strips of LEDs have been the talk of the design world since 2012. That year, Todd Merrill, the Manhattan dealer in twentieth-century design, presented her one-of-a-kind sculptures at Art Basel in Switzerland, where she was immediately embraced. Merrill had been introduced to Barry’s portfolio the previous year. “I loved it so much I did something that I’ve never done before; I signed her up without seeing the pieces in person,” he says. “She made LED lighting, which until then had been ugly, gorgeous! The reaction was overwhelming.” From that first show, her work, which had previously been sold only in the United Kingdom, went international. Her client list now includes top interior designers and architects, including Peter Marino, Nate Berkus, Miles Redd, and David Easton. “She’s become a world-class artist,” Merrill says, adding, “with her level of perfection, you might not think her work is handmade.”

Barry, like most overnight sensations, doesn’t consider herself to be one, but describes her career as a life journey. Born in Dublin in 1968 – where she still lives and works – she attended the National College of Art and Design, and soon after graduation in 1991 set up her studio, making both handcrafted furniture and lighting. She taught herself welding. “I’m very, very careful,” she says. “With bronze I needed to learn how to jig weld. I locked myself away for three months to learn it. Then, in one moment it all fell into place.”

She found lots of work making custom designs for commercial installation for hotels and restaurants. “I spent fifteen years doing this and was very successful, but it was not what I wanted to do creatively,” she says. “But it was hard to step off the treadmill.” When she finally did, she decided to contact Merrill, whom she had met years before on a trip to New York with her husband, Killian McNulty, who is also a dealer. Having discovered that Merrill had begun to represent contemporary work, she dispatched her portfolio to him. The rest, as they say…

Barry says that her art is intuitive, explaining that the story is about “the line” and its journey from inception to finished piece. Taking inspiration from cloud formations, bare branches, and the low winter sun, she begins with hand-drawn sketches, that are then shaped into bronze maquettes. Barry added lighting to her bronze sculptures because “light brings a piece to life. I’ve always been a person in love with life. It draws people. Light is the same way.” And draw people to her work it certainly has.