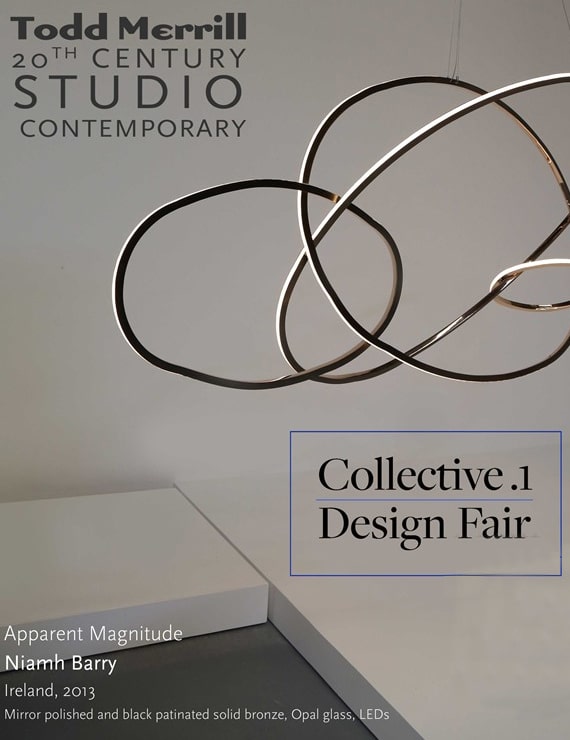 Can a new design fair compete with high-profile events taking place in New York this week, like the Frieze art fair and the May art auctions?

Judging by the attendees of the opening, the inaugural Collective.1 Design Fair (May 8-11) has managed to do so. On the scene, among others, were New York-based collector Sid Bass; Victoria Siddall, Frieze Masters director; Cecilia Dean, Visionaire cofounder; and reality show star and former auctioneer Simon de Pury.

Situated on Hudson River Park’s Pier 57, just steps from the West Chelsea gallery district, Collective.1 is the brainchild of New York architect and interior designer Steven Learner, 52, who has designed galleries for Mary Boone and Tony Shafrazi under Richard Gluckman. Its first edition features 23 galleries in 70,000 square feet in a massive warehouse with sweeping views of the Hudson River.

“Both Basel and Miami have key design fairs, and we aimed to create a much-needed destination fair for New Yorkers and those from abroad,” Learner told A.i.A. Adding to the fair’s luster is an advisory council consisting of art dealers Mary and Sean Kelly, artist Jennifer Rubell, interior designer Delphine Krakoff, actress Julianne Moore and Jamie Drake, who is Mayor Bloomberg’s interior designer.

Still, insiders questioned the viability of a boutique fair in an already action-packed week. Loic Le Gaillard, who heads up the London-based Carpenters Workshop Gallery and is a Design Miami/Basel regular, toldA.i.A., “The timing is right to some degree, but I’m saving my top material for Basel.”

Despite its small roster, the fair is packed with significant examples of both period and cutting-edge design. Right up front is a Sebastian Errazuriz sculpture, topping out at 10 feet high and consisting of rows of industrial fans and a strip of magenta neon spelling out “BLOW ME.” SoHo dealer Cristina Grajales told toldA.i.A. that her artist’s intention is to help lessen the sensory overload endemic to the fair setting.

The lean lineup, and the fact that it consists primarily of New York dealers, is due in part to competition from next month’s Design Miami/Basel (June 11-16), which is loaded with 47 dealers. Even so, Design Miami/Basel stalwarts like Demisch Danant and R 20th Century (both New York), as well as Jousse Entreprise (Paris), are on the pier this weekend.

“This fair is a celebration of design on its own terms and is by no means in conflict with the contemporary art events,” exhibitor Suzanne Demisch told A.i.A. She showcased six pieces by Maria Pergay, includingOursin, a sculpture in stainless steel and rock crystals and coral, for about $100,000.

Nearby, Philippe Jousse reported that his prices in New York are no different from what he will charge for design by French midcentury masters at Design Miami/Basel this summer. He’s offering a pair of Pierre Jeanneret metal armchairs for $300,000.

A number of dealers scored sales at the preview. Jim Elkind of New York’s Lost City Arts clinched a deal on a pair of 1950s Gio Ponti upholstered chairs for $13,000, as well as a 1976 Doug Ayres wood sculpture for $9,800, he told A.i.A. Ornamentum Gallery (Hudson, N.Y.) sold jewelry by the Swiss designer Johanna Dahm priced at $6,000.

At least one exhibitor thinks that competition from Frieze may not be an issue. As contemporary jewelry dealer Sienna Patti (Lenox, Mass.) told A.i.A., “My clients who come out for Frieze already have Collective fixed on their radar.”