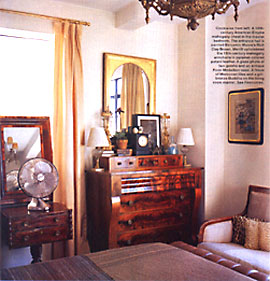 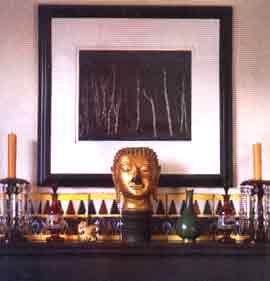 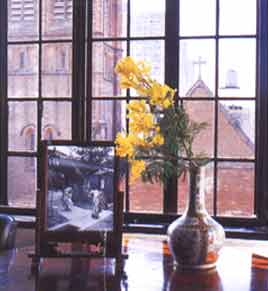 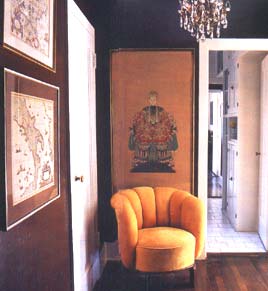 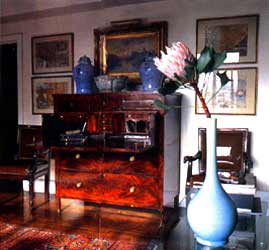 Todd Merrill didn’t want to become an antique dealer like generations of his family before him, but it happened anyway. “I came full circle,” says Merrill, who grew up in Burlington, Vermont, in a five house compound inhabited by his parents, brother, grandparents, aunts, uncles, and various friends – all in the antiques trade.

It turns out that he didn’t need a lot of convincing. One of Merrill’s proudest teenage memories is the day he rang up $25,000 in sales in the family shop; even at the age of 13 it was obvious that Merrill was a merchant in the making. He vividly recalls childhood dinners interrupted by the arrival of pickers, eager to upload their catch from the back of their trucks before dusk, until the Merrills’ three connected barns, with 20,000 square feet of storage space between them, were crammed to the rafters with the stock in trade.

Some of those finds have made their way to Merrill’s two-bedroom flat in Manhattan’s Chelsea neighborhood, where he lives with his wife, Lauren, a television producer/director (his shop, Todd Merrill Antiques, is far across town, on the gritty Lower East Side). In a corner of the guest bedroom stands a 1780 Connecticut bonnet-top highboy, a wedding gift from Merrill’s father, Duane, who is one of New England’s leading auctioneers. It didn’t always look as lovingly preserved as it does now, however. The top of the highboy had been a dusty fixture in a chicken coop for years, while the bottom was tucked away in another barn. Eventually the two halves were rejoined, then restored to their original glory.

“Most of the good studd here is 19th-century American,” Merrill says, though he’s not timid about mixing it up. In the master bedroom, for instance, a square-shouldered American Empire mahogany chest of drawers stands sentry at the foot of a grandly channeled leather bed by Ralph Lauren Home. “That chest was part of my dorm-room furniture at college.” he adds.

Decorating choices are punctuated, too, by the young dealer’s sense of humor, which leans toward things six feet under and is as dry as chapped lips in a Vermont winter. The glass top of the living room’s cocktail table sits on a puzzling pair of ornate nickel-plated bronze stands battered from heavy use. The truth behind their style is sobering: “It’s a 1920s funeral-parlor coffin stand I found at the 26th Street flea market.”

Speaking of dead, Merrill is unapologetic about his small collection of vintage and antique hunt specimens, including an exquisite longhorned African oryx head that gazes quizzically at a photo collage of a charging lion by the coulple’s friend photographer Peter Beard. Across the room, a zebra head – its mouth twisted into a Mr. Ed-style grin and its long-muscled throat rippling with tension-seems poised to jump right off the wall. “I had to get surreal somewhere, and I can’t afford a good Magritte,” he says of the specimen, which was undoubtedly some 1920s taxidermist’s finest hour.

Merrill’s relaxed approach to design is bound to inspire. “I’ll leave a space empty till I find what is right,” he says. “I’m not afraid to wait to fill a hole. Decorating should be a pleasure, not a checklist.” An arrangement of three giant fiddlehead ferns – cellohead would be more like it – in a rustic basket is a perfect example of what the dealer calls his “Museum of Natural History look. The weirder the better when it comes to flowers.” And he updated a pair of late-19th-century mahogany chairs with ram’s-head arms by dressing them in thoroughly modern caramel-colored patent leather a la Billy Baldwin.

A highly attuned connoisseurship and attention to detail is at work as well. Above the living room mantel, a rhythm of trees in an Ansel Adams photograph is echoed in a frieze of colorful Moroccan tile found on a trip to Marrakech. An Art Deco yellow suede Viennese club chair is brilliantly paired with a four-foot-tall 1890s Chinese ancestor portrait, as if some cosmic intention had destined them to meet, through separated by time and culture.

Not unlike the Merrills themselves. “We grew up two centuries apart,” Todd Merrill observes with a laugh, referring to the Modernist leanings of Lauren’s parents. His family’s compound, at least designwise, couldn’t have been more different from his in-laws’ home: a Riverdale, New York, apartment bedecked with Florence Knoll sofas, Barcelona chairs, limestone-and-glass cocktail tables, South American art, and white carpets as thick and soft as an Alpine snowfall. “Lauren’s upbringing expanded my vision,” Merrill says, quick to give credit where credit is due. “She’s taught me a thing or two.”

Thanks to his wife, Merrill has shifted the focus of his antiques shop a bit, stocking Art Deco and midcentury-modern pieces alongside his beloved American Empire treasures. It’s a free-ranging assortment of styles and procenances that mirrors the eclecticism the couple lives with at home. But lessons learned early on die hard. “I’m always accumilating,” Merrill says. “I buy and I sell, but there’s a core of family things we’ll never get rid of.”