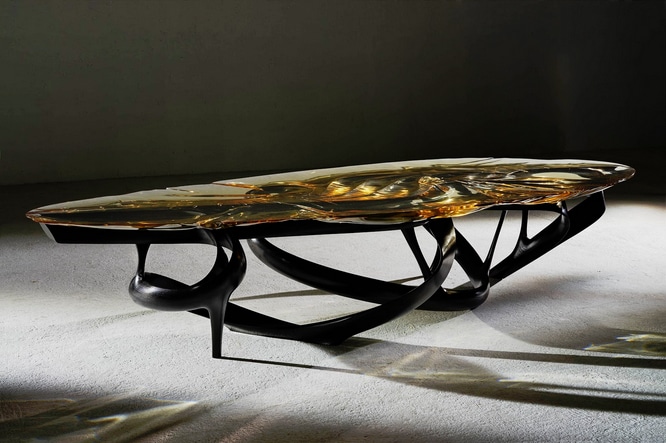 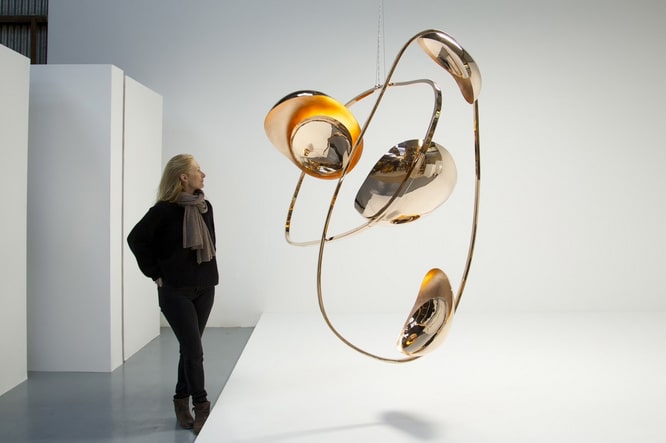 The exhilarating series of work titled ‘Lumenoria’ and ‘Exilumen’, heralds a new phase in Walsh’s creative expression. This series should be considered a significant milestone for the Studio as these works demonstrate a commitment to a studio design language, seen for the first time, in materials other than wood. Manipulating a material sensitively and sympathetically to its natural properties in order to find an inherent yet unexpressed form, maximises possibilities and often leads to the gloriously unexpected. The common thread between ‘Lumenoria’, ‘Exilumen’ and the earlier ‘Enignum’ series is not a signature expression but rather singular forms and structures that are unique to the artist.

Over the course of the last three years Walsh and his team have been expanding the Studio’s design language in new materials. This lengthy exploratory process, demanding proximity to a range of materials and painstaking work to understand and investigate their properties and potentials, is much informed by the way Walsh has worked with wood over the last 15 years.

Walsh’s language of working with wood is based on a principle of allowing a piece to evolve and grow rather than insist on a form or structure and results in truly innovative and provocative work. This new work in new materials continues to honour and reflect this principle.

In the ‘Luminoria’ and ‘Exilumen’ series Joseph Walsh is introducing Resin and Green Irish Marble to his palette of materials; he will exhibit two large scale ‘Lumenoria’ pieces at Salon Art + Design – a piece in Clear Resin and white-finished Ash and a second piece in Amber Resin and dark-brown finished Ash.

The ‘Lumenoria’ dining tables are cast Resin surfaces over free-form wood sculptural bases. The resin is cast through a process of physical form-finding; allowing the liquid resin to respond to the wood form beneath creating an undulating, organic three-dimensional form. The ‘Exilumen I’ Centre Table also exhibited celebrates the symphony of colour in precious Irish Green Marble by floating the marble over stalactites of resin that refract light around the undulating underside of the table.

The carved form is realised from single boulders that have been carved and honed from a found form. The carving process responds to the natural material and conforms it to a form that is appealing to the touch, like that of a pebble that has been eroded in a stream. The soft, tactile forms are akin to what one would expect when finding an ancient, weathered outcrop.

Walsh’s work at the Salon: Art + Design fair will be accompanied by the sculptural lighting of Niamh Barry. Since Merrill first showed Barry’s work in 2012 she has become the darling of the design world creating unique, one of a kind commissions for the top interior decorators and art collectors in the United States and abroad. Barry is designing a light installation exclusively for the Salon: Art + Design fair show.

Titled “Counterpoise”, this new work features hand-raised mirror polished and brushed solid bronze vessels floating amidst Barry’s signature hand formed mirror polished solid bronze rings. The combination of bronze vessels with the bronze rings work together in perfect harmony like a pair of accomplished dancers in motion. Barry will also debut “Gesture” at the Salon: Art + Design fair. “Gesture” is the second in a series of Barry’s most recent wall-mounted light sculpture with prominent angular lines. A dynamic work of art, “Gesture” is experienced differently from every angle. This ability to design a constantly evolving sculpture that interacts with the viewer and its environment is what makes the artist’s work so compelling. Since the debut of the critically- acclaimed “Fouette” light sculpture two years ago, Barry has transformed her work from free-form contours to geometric angles. Like Walsh, the Irish-born Barry is self-taught. Barry’s mastery of bronze, her chosen material, distinguishes her from the pool of artists making illuminated sculptures today.

On the occasion of the Salon: Art + Design fair, Merrill will publish a full-color catalogue dedicated to Barry’s work.