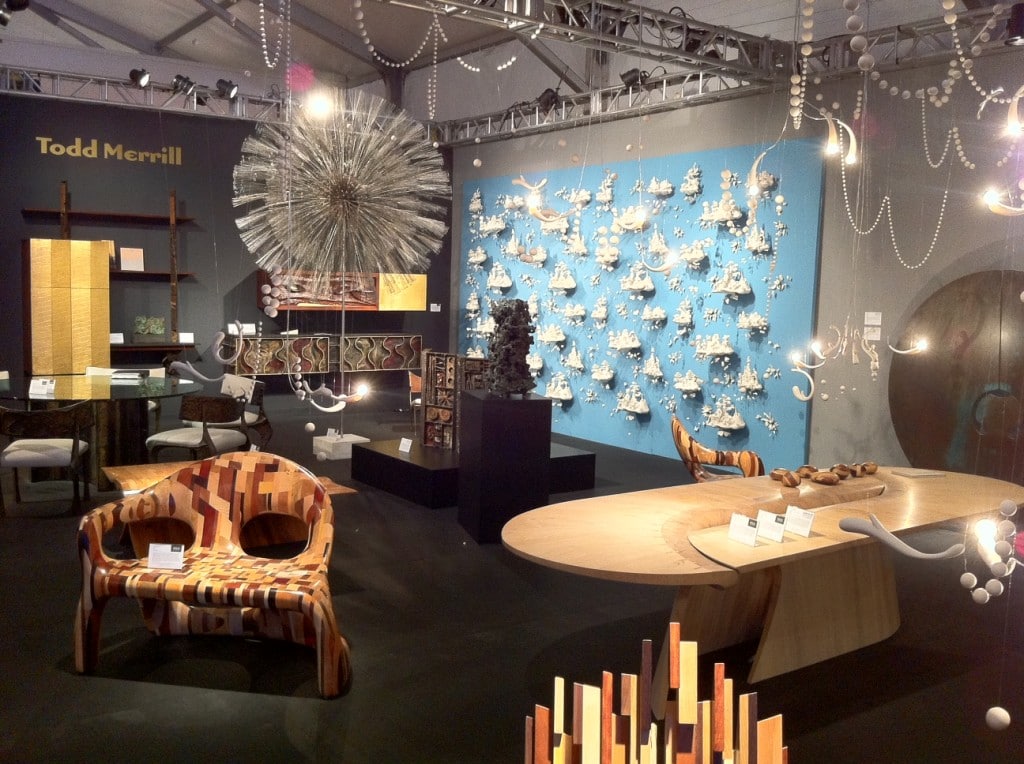 November 17, Miami Beach—Todd Merrill is pleased to be returning to Design Miami/, November 30 – December 4, 2011 for the second consecutive year in a row. Merrill’s booth will serve as a platform for a dialogue between contemporary artists who are using traditional materials in novel ways and icons of twentieth-century design. The booth will feature the work of three celebrated ceramic artists, Jeanne Quinn, Katsuyo Aoki, and Beth Katleman, who are all using their medium to transform the decorative arts.

Quinn’s porcelain lighting installation “Everything Is Not As It Seems” will be exhibited for the first time in Miami in Merrill’s booth. A monumental chandelier/ lighting installation, it gives an initial appearance of chaos only to reveal bilateral symmetry once the viewer is standing in the center of the work. “The whole piece snaps into focus”, Quinn says, “everything is not as it seems; you don’t get symmetry where you expect it, but then an underlying order is revealed.”

The past and the present collide in Katsuyo Aoki’s “Predictive Dream” series of porcelain skulls. Each unique and intricate skull in the “Predictive Dream” Series is created by hand in hard-fired porcelain with white glaze. Each is one-of-a-kind never to be produced again.

“Folly” (Edition #2) a five meter-long porcelain sculpture by Beth Katleman will have its Design Miami/ debut after successful exhibitions earlier this year in Paris, Basel, London, and New York. “Folly” is a three-dimensional ceramic rendering of traditional Toile de Jouy fabric or wallpaper. On close inspection, the elegant Chinoiserie-inspired pavilions that comprise the landscape of “Folly” are populated with kitschy figures from popular culture that tell a dark and poetic fairy tale. The exuberance and refinement of “Folly” are astonishing to behold as it simultaneously blurs the lines between art, design and craft. “Folly” was exhibited at the Museum of Arts and Design in New York as part of the “Flora and Fauna: MAD About Nature” exhibition this fall and will be on view at Claydon House, National Trust, UK in spring 2012.

The booth will feature other Studio Contemporary artists Joseph Walsh, Ilana Goor, and Yard Sale Project. Irish artist Joseph Walsh has been widely recognized by curators and scholars for his extraordinary craftsmanship, which has resulted in his inclusion in numerous exhibitions and private collections. Currently Walsh is the subject of a one-man show in Dublin, Ireland. Merrill will be showing Walsh’s large –scale San Martin dining table and the Sanagi Low-table, the final piece in the edition of 12.

After the triumphant sale of two major sculptures, the Sonambient and the Double Gong by Bertoia, at Design Miami/ Basel this past June for over a million dollars, Merrill will be exhibiting a colossal Bronze Split Gong (1976), measuring six feet in diameter, it is one of a group of three gongs created for the grand opening of the Grieg Hall in Bergen, Norway, which was also the home of the Sonambient Sculpture. The three Gongs were originally installed as a single work, Three Split Gong. The selection will also feature a spectacular Bronze Spill Cast Sculpture (1965), a large example of Bertoia’s experimentations with spill casting liquid bronze.

Merrill is delighted to bring to Design Miami/ a selection of important sculptures by Harry Bertoia including the largest Dandelion Sculpture ever created by him. This epic and rare Dandelion sculpture was commissioned by renowned architect I.M. Pei in 1960. Realized in steel and marble, this particular sculpture was the earliest large-scale example of the Dandelion form and influenced the construction of all subsequent pieces. This highly visible and dynamic sculpture spawned requests for smaller versions that were briefly sold through the Knoll Furniture Showrooms throughout the 1970s. None approached the scale of the original commission.

In addition to the Bertoia sculptures, Merrill will be exhibiting a superb collection of American vintage pieces by Paul Evans and Philip Lloyd Powell. The most significant of these is a custom commissioned Bar Cabinet and Serving Shelf Unit designed and produced by Phil Powell and Paul Evans from 1964. This fantastic early collaborative piece features a bar cabinet in gold leaf and American Walnut created by Powell with a serving counter that is supported by a single sculptural bracket created by Evans that looks like an exploding ball of abstract steel. The whole is mounted on steel triangular poles decorated with brazed bronze and burned markings. This is a great representation of the early creative partnership between Evans and Powell with wood by Powell and metal by Evans and the unique creative vision of them both showing the beginning of the art furniture movement in the early 1960s.